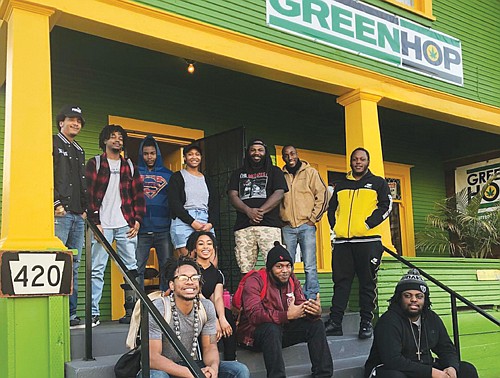 A block party Saturday in northeast Portland will support the local dispensary Green Hop as it continues teaching classes for jobs in the cannabis industry for communities of color most affected by past criminalization of marijuana. Local emcee Fountaine will headline.

A local hip-hop themed dispensary is once again holding a block party in part to emphasize efforts by local African Americans displaced by gentrification to return to their historic neighborhoods and to raise donations to continue career programs geared to communities of color most impacted by cannabis prohibitions in the past.

Green Hop co-founder Karanja Crews, who runs the dispensary with fellow northeast Portland-raised Nicole Kennedy, said the event is meant as a re-claiming of space for displaced black residents that everyone is welcome to celebrate.

“The Block Party represents a ‘re-entrification’ movement, which means to re-enter a neighborhood that has been gentrified,” Crews said.

Fountaine said he is excited to perform at the block party not only because of what Green Hop means to the community but also because he will get to debut his newest album, “South of Nowhere.”

“I lost around six family members this year, so everything coming together, being around black love, a good time, a good environment at one of the staples will be nostalgic, and a good ‘stay-cation’ to let go and let everything loose.”

In addition, all proceeds from the event will benefit Green Hop academy, which teaches black and Latino communities the cannabis industry from “seed to sale,” offering them a rare insight into the booming multi-billion dollar legal arena of all-things Mary Jane.

There will also be a variety of local vendors and info booths for people to enjoy. 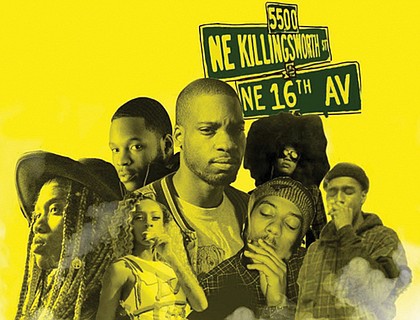 Fountaine (center) will headline the local dispensary Green Hop’s second annual free block party near Northeast 16th and Killingsworth, on Saturday, Aug. 17 from 1 p.m. to 9 p.m. The party honors a movement to reverse gentrification in historically African American neighborhoods and raise money for teaching communities of color to enter the legal cannabis market.