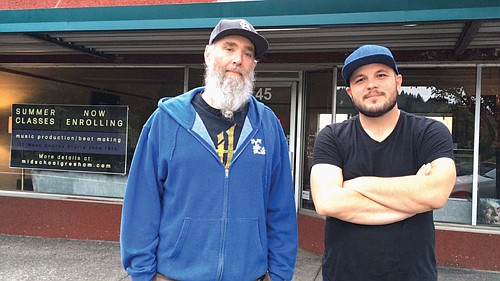 Two local entrepreneurs are finding their niche in the age of digital music by bringing an accessible form of music education to East County.

They teach courses in digital music production at a fraction of the price of many college music courses, but students won’t be subjected to learning sheet music or even learning any instrument, per se. Instead, the focus is on computers and sample-based methods of music production.

“It replaces so many parts of making a record, making music. 30, 40 years ago, you had to go to a studio and you had to know 15 people whose job it was to do each part…now you can do it all by yourself and you don’t need to rely on others and you also don’t need to be classically trained or particularly wealthy or connected,” Grant Burgess, the school’s co-founder, explained.

“Waiting for your friends is the best way to never put any material out your whole life. Come learn how to do it yourself, all the way from start to finish,” added Jeff McCall, Burgess’ business partner and longtime musical collaborator.

Burgess said that the high accessibility of the music production techniques they employ is bolstered by the provision of new and vintage music equipment the school provides to students.

Though electronic music production crosses many genres, the pedagogical approach the instructors take is rooted in the origins of hip-hop, when its early founders changed the music scene permanently by adapting turntables and vinyl LPs to become instruments onto themselves, in the late 1970s.

Burgess and McCall—who together go by the name Widowmaker--share over 40 years of musical production experience that has included big names in hip-hop, commercial, and community projects. Notable collaborators include Sage Francis, Slug of Atmosphere, Ayatollah, Westside Gunn, and Conway the Machine.

One of their beats was recently featured on the Cartoon Network programming block Adult Swim, which features adult oriented comedy shows--both animated and live action--that are often surreal. Their breaks between shows have amassed a cult following for showcasing up and coming indie hip hop acts.

Though there are plenty of hip hop producers to-be at the school, which specializes in small class sizes, there’s also a variety of other genres that coalesce under the same roof, such as singer/songwriters, and neo-soul and k-pop fanatics, Burgess said. The instructors also encourage students to record with real instruments, too, such as pianos and string instruments, even if students don’t know how to formally play them in a traditional sense.

Burgess and McCall also instruct students to gather sounds from unorthodox places, such as sampling old VHS tapes, or even recording natural sounds--like pebbles being thrown into a stream--for texture.

The school provides all the equipment students need, such as the latest professional Abelton software, fast computers, and an extensive vinyl collection for sampling.

He said the goal of the organization includes creating a space where musical and cultural barriers are lowered by cultivating a “community of artists.”

“Regardless of skin color, classical musical training, gender identification, or physical ability or disability, everyone can do this work.”

Midschool holds classes Mondays through Wednesdays, as well as open labs Friday and Saturday evenings. Their next five week course begins the last week of September and costs $500.