OHSU welcomes most diverse class ever 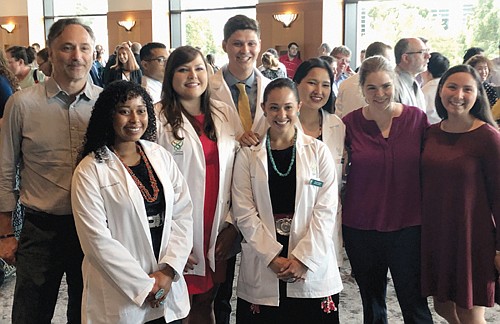 Oregon Health and Sciences University welcomes incoming students to campus, the school’s most racially diverse group ever of future doctors. The class of 2023 includes Native Americans and Native Alaskans recruited as part of a special outreach, pictured here with faculty and program staff. Photo by Erin Hoover Barnett/OHSU

“I’m so much more confident and comfortable not only in the idea of becoming a physician but just starting medical school,” said Kyna Lewis, a Tlingit Alaskan Native and Wy’East cohort member. “I found a place where I actually belong. I have a community. That’s more than I could have hoped for.”

Another student from incoming class represented the first immigrant student who has Deferred Action for Childhood Arrival status. Ponce Campuzano was one of three members of the class of 2023 to have participated in the OHSU Equity Summer Research Program, an eight-week, hands-on internship with research and clinical elements.

“That summer I fell in love with the medical research I was doing at OHSU, and the amount of support I was getting from the faculty and staff on a daily basis,” he said, describing the roots to his inspiration for applying to the medical school.