Police Brace for Clash of Protests 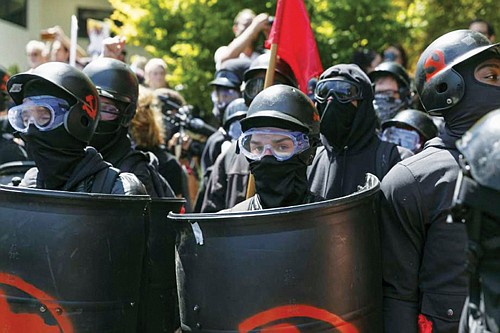 Counter-protesters prepare to clash with Patriot Prayer protesters during an Aug. 4, 2018 rally in Portland, Since President Donald Trump’s election, the city has become a political arena for far-right and far-left groups to face off. (AP photo)

(AP) -- Portland police are mobilizing to prevent clashes between out-of-state far-right groups planning a rally for downtown Saturday and the homegrown anti-fascists who oppose them.

The rally — and the violence it may bring — are a relatively new reality for police, as an informal coalition of white nationalists, white supremacists and extreme-right militias hones its focus on Portland as a stand-in for everything it feels is wrong with the U.S. At the top of that list are the masked and black-clad anti-fascists who turn out to violently oppose right-wing demonstrators as soon as they set foot in town.

"It's Portlandia, and in the public mind it represents everything these (far-right) groups are against," said Heidi Beirich, director of the Intelligence Project at the Southern Poverty Law Center, which tracks hate groups. "It's progressive, and even more offensive to them, it's progressive white people who should be on these guys' side."

The groups know they will get a headline-grabbing reaction from Portland's so-called "antifa," whose members have issued an online call to their followers to turn out to "defend Portland from a far-Right attack." Portland's Rose City Antifa, the nation's oldest active anti-fascist group, says violence against right-wing demonstrators is "exactly what should happen when the far-right attempts to invade our town."

Portland leaders are planning a major law enforcement presence on the heels of similar rallies in June and last summer that turned violent, and the recent hate-driven shooting in El Paso, Texas. None of the city's nearly 1,000 police officers will have the day off, and Portland will get help from the Oregon State Police and the FBI. Mayor Ted Wheeler has said he may ask Gov. Kate Brown, a Democrat, to call up the Oregon National Guard.

"There's no winning for the cops in a situation like this. There just isn't," Beirich said. "This is hard-core stuff, and I don't think you can be too cautious."

Experts who track right-wing militias and hate groups warn that the mix of people heading to Portland also came together for a Unite the Right rally in 2017 in Charlottesville, Va., which ended when a participant rammed his car into a crowd of counter protesters, killing one person and injuring 19.

The rally is being organized by a member of the Proud Boys, who have been designated by the Southern Poverty Law Center as a hate group. Others expected include members of the American Guard, the Three Percenters, the Oathkeepers and the Daily Stormers. American Guard is a white nationalist group, according to the Southern Poverty Law Center, while the Three Percenters and the Oathkeepers are extremist anti-government militias. The Daily Stormers are neo-Nazis, according to the center.

Many of today's anti-fascists trace their activist heritage to a group that battled with neo-Nazis in Portland's streets decades ago, and they feel this is the same struggle in a new era, said Randy Blazak, the leading expert on the history of hate groups in Oregon.