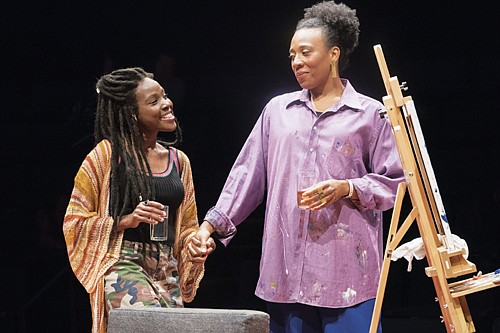 Every once in a while, I stumble on the opportunity to see a play that I didn't realize I was longing for. The richly realized production of Christine Anderson's marvelous play, "How to Catch Creation," at the Oregon Shakespeare Festival in Ashland through October, was such an experience for me--an opportunity to spend an evening with six African American characters who I wish I knew in real life, not one of which I've seen in a play before.

Griffin (especially well played by Chris Butler) is newly out of prison where he served 25 years for a crime he did not commit. Tami (an equally remarkable Christiana Clark), an artist and professor, has been Griffin's friend since they were both young adults. Their friendship is deep, familiar, lived in, but not romantic; each talks truth to the other as Griffin searches for a way to become a parent and Tami befriends Riley, a young woman who awakens her artistic and romantic passions. Riley, too, is inspired by Tami, but also entangled with and committed to her boyfriend Stokes, a frustrated painter who is inspired to write after being introduced to the works of black feminist writer G. K. Marche.

These intersecting relationships unfold in overlapping scenes and overlapping conversations, and with flashbacks of G. K. and her partner, Natalie, back in the mid-1960s, when G. K.'s writing was taking off. In a very different time from now, these two women love each other but both social pressure and the lure of artistic inspiration drive them apart.

It's a play about black people apart from the white gaze; they suffer but the play is not about black suffering. It's about love, and intimacy, and mistakes, and artistic inspiration, and mistakes one makes and seeds one plants in one's youth that bear fruit you may never see. It's also about how to catch creation -- How does one become a parent? Who creates a child, and how do they do it? What inspires creativity? Why does it feel so precious? Can creation and intimacy co-exist? What makes one an artist?

Anderson's play savors these questions without answering them. It gives us the opportunity to watch these six characters struggle with these questions, which is itself something to savor--because when do we get to see black people with agency struggle with meaning on stage? Not often enough--and Anderson's play prioritizes the voices of black queer women. G. K., an invented character, stands in for a host of black women writers (Audre Lorde, Toni Morrison, Maya Angelou, Pat Parker, Sonia Sanchez, Nikki Giovanni, and so many more) who fought to be heard and to avoid erasure, and whose voices ring with clarity borne of struggle. In this play, black queer women lead the way for six people fighting to speak and love and live with integrity. With a uniformly excellent cast and as directed by Nataki Garrett, the new artistic director of the Oregon Shakespeare Festival, this production is especially worth making the trip to Ashland before it closes in October.