Advocates for the hungry decry proposal 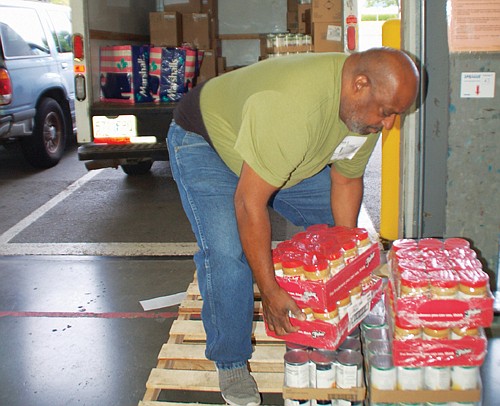 Kenneth Green of the Salvation Army collects food donations for distribution to needy families from the Oregon Food Bank in northeast Portland, Advocates for the hungry are bracing for a rule change from the Trump Administration that could kick three million people off of food stamps, including over 60,000 in Oregon. Photo by Danny Peterson

Advocates for the hungry are bracing for the impacts while fighting against a proposed rule change from the Trump Administration that could kick more than three million people off of food stamps, including over 60,000 in Oregon.

Under new regulations that are scheduled to take effect after a Sept. 23 public comment period, qualified recipients of Temporary Assistance for Needy Families (TANF)—a form of cash welfare--will no longer automatically be enrolled in food stamps, also known as the Supplemental Nutrition Assistance Program or “SNAP.”

U.S. Agriculture Secretary Sonny Perdue announced the new directives last month, describing them as “closing a loophole,” but the new rules would disrupt Oregon and 42 other states’ streamline of the process for their citizens to receive food benefits.

The rule change would see 66,000 of the some 600,000 Oregonians on SNAP benefits lose their coverage—or 34,990 households— Jennifer Grentz, Oregon Department of Human Services spokesperson, told the Portland Observer.

Jeff Kleen, public policy advocate for the Oregon Food Bank, said the agency is “very concerned” over the new rule.

“We had heard rumors that this proposed rule could come, particularly because this has become kind of routine for this administration to propose these administrative rules when it doesn’t get the provisions and bills that it wants from Congress,” Kleen said.

The technical name for the rule targeted is “broad based categorical eligibility,” Kleen explained.

In either case, the amount of earnings would not be sufficient to support a livable wage for most Oregonians, Kleen said.

For instance, 185 percent of the federal poverty level for a family of four is $47,638, according to U.S. Department of Health and Human Services. However $96,047 per year is the estimated wage a family of two adults and two children would need to make to afford a modest two bedroom apartment, childcare, and other costs in the Portland metro area, according to the family budget calculator of Economic Policy Institute, a nonprofit and nonpartisan think tank addressing the needs of low- and middle-income workers in economic policy discussions.

The policy as it stands now allows families to pay for unexpected monthly costs without going hungry or missing their bills, Kleen said.

“It basically prevents families from going without food, falling into debt when unexpected costs come up. And that cost could be the car repair that someone needs to get to their job, get their kids to school, or get a medical appointment,” he said.

Another potential ripple effect of the new policy is that some families—an estimated 265,000 nationwide--may also lose free school meals for their children, Kleen said.

“They’d have to go through, again another process, to see if they would qualify for reduced price meals. But now if you have two or three kids and suddenly you’re facing 50 to 75 cents a meal, that adds up over a week for breakfast and lunch. And so that would be an additional loss on top of losing SNAP benefits.”