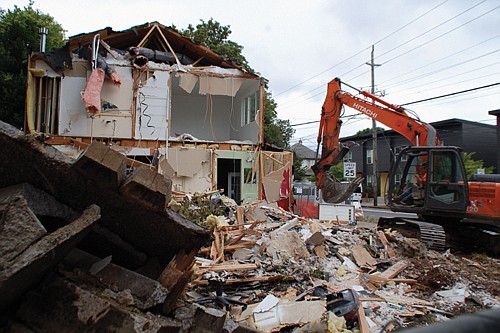 A two-story house at North Vancouver Avenue and Alberta Street that was constructed just 14 years ago but ended up providing office space for the Ernest J. Hill Jr. Insurance Agency was demolished last week to make room for a new 5-unit hotel. Photo by Danny Peterson

The demolition of a house used for office space to make room for a new 5-unit hotel is a clear sign of the economic forces and gentrification changing the characteristics of historic black neighborhoods in inner north and northeast Portland.

Located in the Humboldt Neighborhood at North Vancouver and Alberta Street, a once majority black neighborhood that has lost a big chunk of its diversity over the past couple of decades, the former 2-story structure came tumbling down last week, just 14 years after it was built and became an office for the black-owned Ernest J. Hill Jr. Insurance Agency which has moved to another location.

The incoming new three-story hotel will also include office space and rise above an existing commercially-zoned lot of just 1,788 square feet, less than half the size of a standard residential lot, records from the Portland Bureau of Development Services show.

The hotel is estimated to cost $1.1 million to build. The contractor is YK (Yorke and Curtis) Building Excellence, a builder of new modern apartment buildings in other parts of the city, including a 34 unit complex at Northeast 19th and Alberta.

While located is in a historic residential block, and also facing a state Employment office across the street, the commercial zone allows some of the greatest flexibility on building plans with no parking requirements under city code.

The property was purchased for $450,000 for redevelopment in 2018 by Aaron and Meghan Saito of Lake Oswego. The previous sale price for the property was $239,000 after the former home on the site was constructed in 2005.