Fostering Employment in the Trades 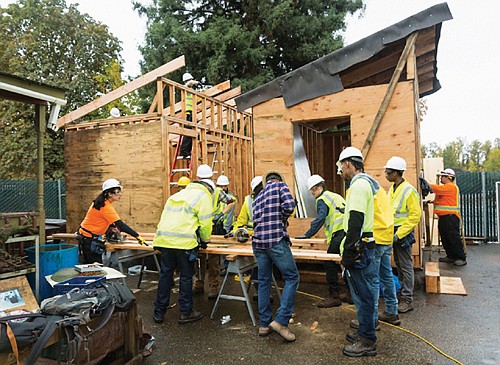 The city of Portland is investing $100,000 to help the northeast Portland nonprofit Constructing Hope provide construction training and records expungement for low-income residents.

The recent grant will pay for the training of 50 community members in the skilled construction trades and add new records expungement services for people with a criminal justice history.

“Traditionally, people of color were disproportionally tarnished with a criminal record for minor offenses, including cannabis possession,” said Pat Daniels, executive director of Constructing Hope. “So this grant will have a tremendous impact on Portland’s communities of color.”

Construction is one of the few industries that will hire people with a criminal record, but that record can bar graduates from many projects, such as federally-funded contracts. Constructing Hope will help people reduce or remove their criminal records history and secure their driver’s license in a timely manner.

The grant will help people like Robert Thomas. When Robert came to Constructing Hope, he was struggling to find a life direction after eight years in the criminal justice system. With custody of his 10-year-old daughter, it became even more important to gain the skills to better not only his life, but his daughter’s.

“The day the program ended, I got a call to go to work” as a first-term ironworker apprentice with Local 29—earning $22.25 an hour.

With this grant, Robert can potentially reduce his felony record to a misdemeanor and qualify for desirable contracts such as Port of Portland and the Portland airport.”