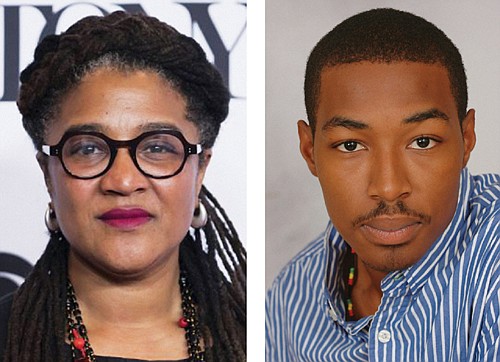 The Pulitzer-prize winning play "Ruined" by Lynn Nottage, left, will be directed by La-Tevin Alexander, right, at the Imago Theater Dec. 4-8.

Portland theater audiences have an all-too-rare opportunity this week to see the work of the great Lynn Nottage on stage. The African-American playwright and screenwriter is a focus of Profile Theater this season, beginning with this week's concert staging of her Pulitzer-prize-winning play, "Ruined."

Part of the inspiration for that play is "Mother Courage and Her Children," an anti-war play written in 1939 by German playwright Bertolt Brecht. Set in the European Thirty Years' war of 1618-1648, Mother Courage focuses on a canteen woman with the Swedish army who stops at nothing to make a profit from the war and loses her own children in the process. Where Brecht's approach is purposefully stylized, distancing the audience from emotions so that they can make critical judgments, Nottage sought to grapple with similar material in a way that navigates the characters' emotional lives and uses emotion to help us see. Drawing from time spent in Uganda, Nottage sets "Ruined" in current times and tells the story of Mama Nadi, whose brothel serves soldiers and includes women brutalized by the Congolese war.

Profile seeks to illuminate the work of specific playwrights and, in this instance, promotes understanding of Nottage's work by also exploring its origins. Audiences will have the opportunity to see staged readings of both plays featuring the same talented cast of mostly African American actors. "Ruined" is directed by Portland’s La'Tevin Alexander, and "Mother Courage" is directed by Jamie M. Rea, and concert stagings are paired-down productions with book in hand, allowing a focus on the actors and the text.

This is the first time that audiences will have the opportunity to experience "Ruined" here in Portland. It's a devastating play, steeped in African consciousness and also deeply universal in the questions it explores about suffering, exploitation, and survival. Pairing this staged reading with Brecht's work, interpreted by the same cast, offers a particularly rich opportunity to experience this material in a way that does not prioritize the white gaze. And audience members of color have the opportunity to see "Ruined" in an affinity space as well; Profile invites people of color and allies to meet for drinks, snacks and music an hour before the performance on Sunday, Dec. 8 and offers discounted tickets that night. The two shows will play in alternating repetitions, Wednesday, Dec. 4 through Dec. 8 at the Imago Theater, 17 SE 8th Ave.

What happens when we become acclimated to strife and violence? What will we do to survive? When does courage become exploitation? These two shows offer an opportunity to sit with these questions, as explored by talented artists of color.