Stepping Up for the Homeless 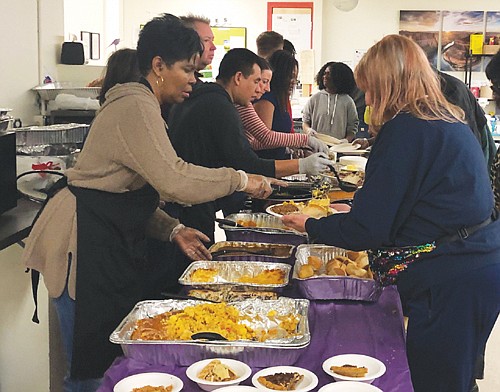 The Walnut Park Shelter on Northeast Martin Luther King Jr. Boulevard had a full Thanksgiving Day meal thanks to the hard work of volunteers who stepped up at the last minute to feed scores of homeless residents. Photo by Tony Brown

After a story appeared in the Portland Observer that there would be no Thanksgiving dinner served at the Walnut Park homeless shelter on Thanksgiving Day, about 30 people contacted Bora Harris, community liaison for the shelter, and put on a spread that was more than enough to feed scores of people a traditional meal.

“I had about 30 people that contacted me and about 18 who served,” Harris said. “We put together a menu and delegated what everybody would bring. Our goal was to get people to respond and spread the word.”

It obviously worked, to everyone’s delight, and there was more than enough food to go around.

“They could have as many servings as they wanted and we had food left over and to make sandwiches the next day,” Harris said.