Christmas play at the Armory 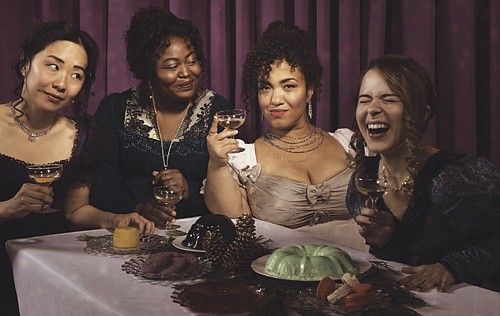 Holiday entertainment isn't known for up-ending expectations. Just about any Christmas film, play or song is meant to feel familiar and to reinforce what you already believe, leaving you feeling good.

In most respects, Portland Center Stage's production of "Miss Bennet: Christmas at Pemberley," now playing at the Armory through Dec. 29, meets all those requirements. Though it’s a relatively new play written by Lauren Gunderson and Margot Melcon, it builds on the old and familiar notes of a Regency romantic comedy, picking up where Jane Austen's "Pride and Prejudice" leaves off. It's light and funny, warm-hearted, and it’s not even a spoiler to say that everything turns out well in the end.

But there are some small but significant ways that this particular production of a fun and frothy play does up-end expectations in just the right ways. Director Marissa Wolf has wisely cast Portland's own Lauren Modica in the lead role as Mary Bennet, the middle sister whom everyone discounts, giving this comic beauty the opportunity to do more than liven up the production as she regularly does whenever she is on stage. Modica herself has no doubt been counted out as a romantic lead too many times, but she has absolutely spoiled this role for anyone else. She brings an unexpected complexity to Mary's emotional journey from an underestimated brainiac to a woman who dares to hope for love but who also does not suffer fools. Her Mary is not simply funny (though she absolutely is); she is also formidable and arresting; Modica's performance deepens the pleasures of material that would in other hands be a bit too comfortable.

Modica is surrounded by a vibrant cast who, like her, are clearly relishing the experience. Joshua J. Weinstein is particularly endearing as Mary's conveniently rich, nerdy soulmate, absolutely selling a hard-to-achieve balance of innocent and charming and brilliant and socially awkward. Kailey Rhodes also stands out as Mary's younger sister Lydia, brilliantly employing physical comedy to drive home the ridiculous lengths that Lydia goes to get what she wants, purely for amusement. And the diversity of the cast works to elevate this material (which, let's face it, is not particularly realistic) in a way that invites everyone into the holiday fantasy that is being served.

The story here isn't surprising or challenging, but it doesn't have to be. Director Wolf has made the most of this solid cast, Gunderson's and Melcon's snappy dialogue, and a delightful production design (Alex Wren Meadows's costumes are particularly dazzling) so that everything moves with buoyancy and good cheer. One couldn't ask for a more nutritious holiday bauble than this.