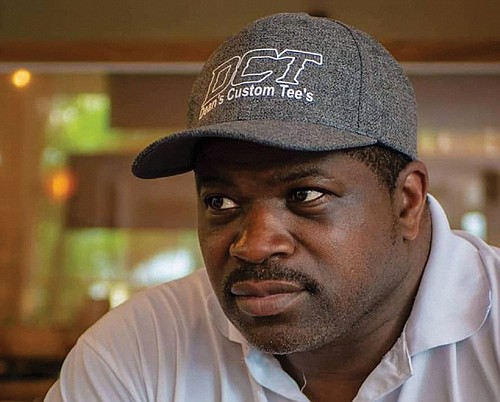 Samuel David Dean was born April 8, 1969 and died Dec 7, 2019. He was a gentle giant, a man of few words whose presence spoke louder than words. He attended Holy Redeemer Elementary and graduated from Jefferson High School, where he won many track and field metals. He attended Central Oregon Community College in Bend and majored in psychology.

During school breaks, he would work at the family business, Doris’ Café and after graduating he worked full time at Doris’ for 20 years in many capacities: manager, cook and waiter, whatever was needed. After the restaurant closed in 2002, Sam continued to run the Doris’ Café food carts at the Rose Garden and Memorial Coliseum during Blazers and Winterhawks games. He then began working as a courier at Federal Express where he remained for 18 years. Sam finally pursued his dream and started his own business Dean’s Custom Tees. He worked with many corporations, fundraisers, sporting events and with multiple community members.

Sam also enjoyed his quiet time and would take long drives “just to clear his head.” He once took a drive to Hermiston in eastern Oregon to get a single watermelon, “Just to clear his head.” On Dec. 1, 2003 Sam became a founding member and then later became president of the Full Tilt Riders Motorcycle Club, “The Parent Chapter.” His true passion was bowling. He rolled many perfect 300 games and won a ring for an 800 series from the USBC.

Little did Sam know 18 years ago Bug would introduce him to the love of his life, Pep, better known as Asia. Which is a name he kept calling her and it stuck. They shared a special relationship admired by so many, but to them it was the love they shared every day. Sam enjoyed traveling with Asia. They visited Jamaica, Mexico, and the Bahamas. For his big 50th birthday this year they travelled to Cabo, and spent two weeks in Cambodia where he made a huge impact and where they made him feel like a celebrity (not because he was big and black, wink).