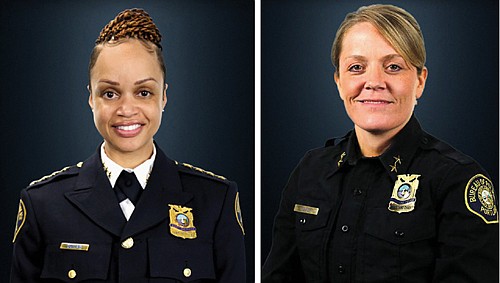 Portland Police Chief Danielle Outlaw, left, will be leaving to head up Philadelphia's police department. and Deputy Police Chief Jami Resch will be promoted to be the department's permanent chief..

Outlaw came to Portland two years ago from the Oakland Police Department in California. During her tenure here, she challenged the city and law enforcement to address racial inequities and now becomes the police chief of the fourth largest police department in the nation, with more than 6,500 sworn and 800 civilian members.

“I’d like to congratulate Chief Outlaw for landing a once-in-a-lifetime opportunity,” Mayor Wheeler said Monday in a news release. “We thank her for her service to the city of Portland and the Portland Police Bureau where she helped make a positive difference. She came to Portland exceedingly qualified for the position of police chief, and leaves more prepared than ever for her new position in Philadelphia.”

Wheeler credited Outlaw for helping build community trust and public confidence in the Portland Police Bureau. He said under her leadership, the bureau formalized the use of the Incident Command System model for critical incidents and crowd management, and implemented crime strategies tailored to each precinct that have effectively reduced crimes against persons, property and society.

Outlaw praised Mayor Wheeler for placing his confidence in her during the two years she served in Portland.

“For police chiefs, I don’t think there is ever an ideal time to transition on to our next role in life. However, I am making this transition on good terms, knowing the bureau will be left in the hands of a strong leadership team, led by Chief Jami Resch. And while there will always be work to be done toward improvement, that does not take away from the fact that the members of the bureau are not only extremely talented, compassionate and professional, they are also resilient and accountable to themselves, each other and to the community,” Outlaw said.

“I leave knowing the Bureau will remain committed to community safety while building trust. It has been an honor and a privilege to serve as Portland’s Police Chief, serving alongside the members of the Bureau and partnering with countless, remarkable individuals within Portland’s community. I will forever be appreciative of my experience here,” she added.

Portland City Commission Jo Ann Hardesty, the first black female member of the Portland City Council and a longtime advocate for police reforms, said Outlaw came to Portland as a visionary leader and wished her well in her next role.

“While I appreciate the work done by Chief Outlaw, the fact remains that chiefs will come and go, but it is the culture they leave behind that matters most to our community. There is still much work to be done to make the Portland Police Bureau the organization we need it to be, and I look forward to working with Chief Resch as she takes on this charge.”

Wheeler said the new incoming chief meets or exceeds all of the police bureau’s current leadership needs, citing her 20 years of experience with the Portland Police Bureau coming up the ranks, and being highly engaged within the community, citing her service as an active member of Police Bureau’s Muslim Council, Slavic Advisory Council and Refugee Integration Program, for examples.

“I have complete confidence that Chief Resch will excel as our next police chief. She has my complete trust and a thorough understanding of my agenda. She is the right person at the right time for the job,” Wheeler said.

Resch will be the fourth woman to oversee the Portland Police Bureau in city history.