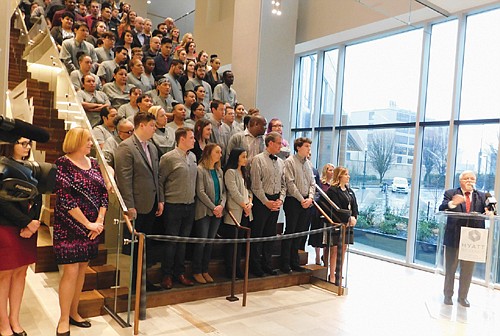 Tom Hughes, former Portland Metro Council president, speaks at the Dec. 19 grand opening celebration for the new 600-room Hyatt Regency Oregon Convention Center Hotel in northeast Portland, with a diverse group of employees of the new hotel filling the stairs behind him. Photo by Beverly Corbell

When the Oregon Convention Center was constructed on the east side of the Willamette River in the late 1980s, hundreds, if not thousands, of African Americans were pushed out of their homes and businesses.

Those neighborhoods will never come back, but at a Dec. 19 ribbon cutting for the new Hyatt Regency Oregon Convention Center Hotel, former Metro Council president Tom Hughes said there was an emphasis on diversity and equity for both in the construction of the 600-room hotel and hiring of local staff to run it.

“We wanted to create an opportunity for people who live in this neighborhood, many of whom were displaced by the construction of the (Veterans Memorial) Coliseum and Convention Center and other places, that did away with a lot of housing that was in this area,” Hughes said.

Hughes said he had been working with Metro on “a diversity, equity and inclusion program” when plans for the hotel began to take shape, and Mortenson, the construction company that built the hotel, was fully on board, he said.

“Mortenson partnered with us on this even more than we’d expect, with a program that attempts to move people through a pre-apprenticeship program by working on several projects together, to eventually get experience and family wage jobs for the rest of their lives,” Hughes said.

Hyatt Regency general manager Shane Nicolopoulos said that Mortenson was invested in the Community Construction Training Program, a collaborative effort to increase access to trade careers for women and people of color.

Mortenson spokeswoman Kelli Amico said final numbers for people of color and women who worked on building the hotel will be available in January, but said the company “emphasizes diversity and inclusion in all of its projects.”

“Leading up to the hotel’s opening, it was a priority for us to develop job and training opportunities,” he said.

Metro’s FOTA was created in 1989 to give displaced residents priority for jobs at the Convention Center and was later expanded to other areas from which residents were forced to move.

The new hotel, with three restaurants and 18 meeting rooms, along with the 11,000-square-foot Regency Ballroom and the 5,000-square-foot Deschutes Ballroom, is the first hotel to be built adjacent to the Convention Center, which recently underwent a $40 million renovation that city leaders hope will attract more business to the city.

The hotel was designed by ESG Architects and achieved the highest rating for Leadership in Energy and Environmental Design certification.

Getting the hotel built wasn’t easy, Hughes said, and took “many, many, many years” and took the cooperation of both city and county elected officials.

“There were 17 individuals who had to sign off on the financing for this hotel and we got 16 out of 17 votes,” he said.

Hughes also gave credit for the hotel’s completion to two former Portland mayors, Sam Adams and Charlie Hales, who kept interest in the project alive, even though at times it was on life support.