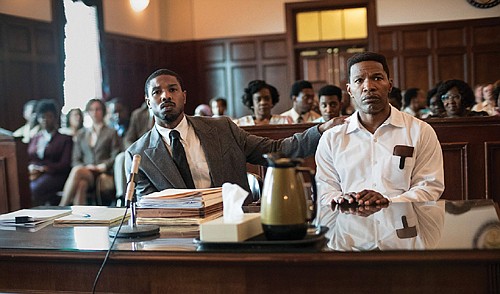 Michael B. Jordan (left) and Jamie Foxx in a scene from “Just Mercy,” a new historical drama about a young black lawyer, Bryan Stevenson (Jordan), and his history-making battle for justice. Photo courtesy Warner Bros.

A powerful and thought-provoking true story about justice and redemption and the young black lawyer who pursued the case opened in movie theaters across America on Christmas with a full nationwide release coming Jan. 10.

The film tells the story of young Harvard-educated lawyer, Bryan Stevenson (Michael B. Jordan), who could have his pick of law firms. Instead, he heads to rural Alabama to set up a small practice. In the deep south, with all its confines, he seeks to reverse death row sentences for wrongfully convicted prisoners and partners with local advocate Eva Ansley (Brie Larson).

The two find many on death row are in need, but Walter McMillian (Jamie Foxx), who was convicted of killing an 18-year-old white woman, becomes a prime client.

McMillian says, “I didn’t do it” and there’s enough evidence to question his arrest, trial, conviction and sentence. But where he lives, in 1988, no one has enough power or know-how to fight the judicial system. He needs a crusader and Stevenson answers the call: “Your life is still meaningful, and I’m going to do everything I can to keep them from taking it,” he says.

To get a feel for Jordan’s interpretation of the role, close your eyes and imagine a young Sidney Poitier. That’s the way Jordan plays the character. Not like a fiery, agitated Denzel Washington. Or a gritty, emotionally raw Jeffrey Wright. Jordan’s Stevenson has a slow, steady and academic manner. It’s a refreshing change from the heroes and martyrs he often plays.

Foxx gives his best performance since Ray. Every action, facial expression and ounce of dialogue is channeled through him with a conviction that he rarely shows. Larson finds the core of her character too. Rob Morgan, Tim Blake Nelson, Rafe Spall, O'Shea Jackson Jr. and Karan Kendrick as Walter’s wife form the rest of the very earnest ensemble cast.

Director Destin Daniel Cretton’s approach to the crime/courtroom/drama genre is near formulaic. Nothing on view—from style, to production elements, to substance—seems particularly new or unique. But his guidance gets the job done.

Cretton and co-writer Andrew Lanham use the real lawyer Stevenson’s award-winning non-fiction book Just Mercy: A Story of Justice and Redemption as source material. The script they’ve created is clear, has distinctive characters, evolves competently and heads to an ending that is bigger than its building blocks. Yet, something is missing. Something big. Something that would make this an extraordinary tale about injustice.

Adult and urban viewers should find the film’s depiction of poor black men being railroaded into death sentences—well into the late ‘80s—alarming and enlightening. Whether they view Just Mercy in a theater or on a streaming service, its details on history, racism and activism should be quite affecting.

On a far more personal level, watching a very northern and stiff African American lawyer awkwardly adapt to a friendly rural southern black community is compelling. It’s a fascinating juxtaposition. A contrast in cultures that elevates a true story.

Dwight Brown is a film critic for the National Newspaper Publishers Association, a professional group known as the Black Press.