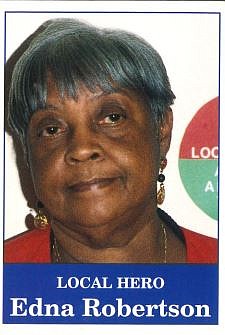 On Dec 29, 2019, Edna Robertson, a local hero who was affectionately called the mother of Portland’s black community, passed away.

During the late 1980s and throughout the 1990s, Robertson worked tirelessly as an advocate for neighborhood participation in North and Northeast Portland as the Executive Director for the N/NE Neighborhood Coalition for the city of Portland.

In the late 1980s, she was the face of the Portland Fire Bureau’s Smoke Detector campaign that lowered fire deaths in the community.

Edna Robertson loved pre-gentrified North/Northeast neighborhoods. She fought for economic justice, educational equality, compassion and understanding during the crack cocaine epidemic and was a strong advocate of community policing.

She leaves behind three daughters, one son, two grandchildren and one great granddaughter.