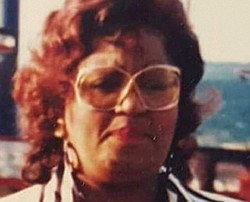 She was born on May 20, 1937 in Austin, Texas to Frankie B. Slider and Tom L. Slider Jr. and died Feb. 9, 2019 in Portland. She and her brothers James T. Slider and Ralph B. Slider and sister Tommie M. Slider were raised in a home filled with love for God and family. The Slider family eventually moved to Vancouver and then Portland/

Louise was not only beautiful with a great personality, but very smart in school. After her primary grades in Austin, she graduated from Lieser Elementary School and Fort Vancouver High school in Vancouver. It was in high school that she was smitten by a young man named Donald Richard Malone. They were married in 1952 and had one child, Michelle Marie in 1953.

At an early age she subscribed to her family tradition of helping others and giving back to the community. She enrolled in a nursing program in 1954-1958 at St. Vincent Hospital and worked as nurse at St. Vincent, Wilcox Memorial and Holladay Park hospitals. She also worked in the hospitality industry at the prestigious Benson Hotel. Later she became ready to open her heart again by meeting Buford Leon Burton better known as “Jack.” They were married in 1957 and little Kimberly Renee was born in 1959.

Louise developed the love of being an outstanding cook from her mother. She shared many special family recipes with her daughters and grandchildren. It was one of the many ways she shared her love during family breakfasts, Sunday dinners, picnics, birthday parties, barbecues or just entertaining friends.

She later entered a social work program from 1973 to 1975 at Portland Community College. The experience from both her nursing and social work careers combined to help her with positions in the Women In Transition Project, Albina Action Center, Beech Street Project, Urban League of Portland and Albina Ministerial Alliance. She was a dedicated community servant changing lives for more than 30 years.

No matter life’s challenges she was guided by her faith, love of family and believing in God’s plan for her life. Being the eternal optimist, she eventually met the love her life Clyde A. DuBoise at a chance meeting at Grant High School attending one of Michelle’s school activities. They were both at life’s crossroads and realized their journey was destined. Families blended had a wonderful life together filled with the love and joy of cooking and traveling together. They were happily engaged together in a 35 year relationship until he preceded her in death. They can now dance together again.

Louise was an amazing daughter, sister, wife, aunt, cousin, niece and extraordinary mother and grandmother and friend. She loved her children and grandchildren dearly. Her zest for life and love was infectious.