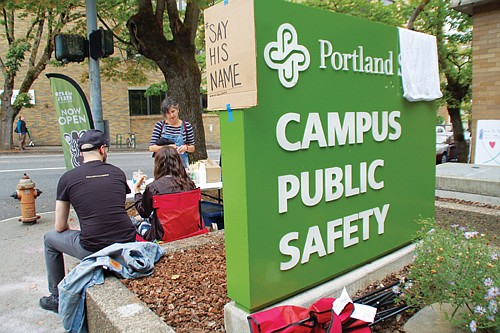 A special board meeting at Portland State University has been scheduled for next Thursday, March 7 after consultants hired by the university released a report Friday recommending keeping armed officers at PSU even as it presented a new survey showing a slim majority on campus were opposed.

The accompanying 213 page report, which was commissioned by PSU, comes after campus public security officers responded to a disturbance last June 29 that resulted in the death of Jason Washington, a 45-year-old African-American Veteran, father, grandfather and postal worker, outside the Cheerful Tortoise bar, near the Southwest Portland campus.

Witnesses said Washington was trying to break up a fight and a gun fell from his body before he tried to pick it up. He was shot multiple times by two responding PSU officers, marking the first officer-involved shooting at the school since campus police were armed in July 2015.

The officers were cleared of all wrong-doing by a Grand Jury. Body-cam video captured from both officers during the incident that seemed to show Washington holding a gun. The weapon was later determined to be his friend’s, but Washington had a permit to carry a concealed handgun.

Student-led protests and occupations of the Campus Public Safety building followed with the protesters over arcing demand for disarming campus officers.

The consultants’ poll included 4,150 surveyed people, out of the roughly 27,670 people who work and learn at PSU. 37 percent of respondents wanted police to keep their weapons, while another 10 percent had no opinion.

Though the slim majority of respondents said they’d like the officers to be without guns, the consultants said the trend for major American universities is to have armed police on duty. They recommended having a mix of armed and unarmed officers at PSU, constructing more lampposts near MAX transit stations, and creating a “mini police academy” that would include 80 hours of in-service training per year, including some bias and de-escalation training.

The Portland State Board of Trustees special meeting on March 7 to discuss the consultant’s report will take place from 9 a.m. to noon at PSU’s Smith Memorial Student Union Ballroom.