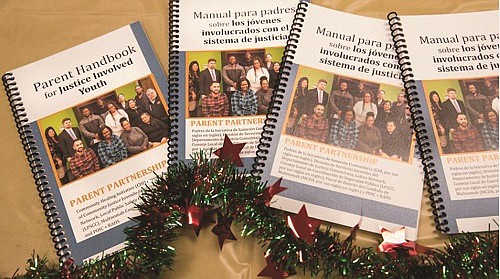 A 48-page handbook for parents with children in the criminal justice system offers tips on everything from visiting hours at the Donald E. Long Detention Center to a glossary of common justice terms to tips for court appearances and important contacts for parents. Photo by Motoya Nakamura/Multnomah County

The normally busy halls were silent. The bustling students were noticeably absent. Folded tables and chairs, stacked against the auditorium wall, signaled the day was done at Rosemary Anderson High School in east Multnomah County.

Still, a small group of parents, mentors, lawyers, judges, elected officials and juvenile justice leaders, gathered in the quiet halls to rally and mark a momentous occasion: the release of the “Parent Handbook for Justice-Involved Youth.”

The 48-page handbook includes everything from visiting hours at the Donald E. Long Detention Center to a glossary of common justice terms to tips for court appearances and important contacts for parents.

It was crafted by legal experts and parents who’ve endured the twists and turns of the criminal justice system — so they could help and empower other parents to understand and navigate it. The handbook is part of a multi-pronged strategy by Multnomah County to address youth and gang violence.

“This [handbook] is a labor of anger and tears but also of love,” said Alice Perry, the Latino Network’s director of community stability and support services. “When our children suffer we also suffer. But we always have faith in our children even in the worst of circumstances.”

Shala, a single mother of four, helped craft the parent handbook. She described the trauma the day she got the call from police who detained her son at his high school. He had stolen a teacher’s cell phone. Dealing with the legal system was daunting.

“When you first get the call, it’s like, ‘Oh my goodness,’ and then when you get there [juvenile court] they say, ‘Oh, you’re looking at 30 days or up to a year in detention,’” Shala said.

The arrest was the culmination of years of struggle with school systems and at home for the 42-year-old. As a young child, Shala said, her son was treated and punished differently at school. As early as the second grade, he received an Individualized Educational Plan that followed him throughout his educational experience, she said.

“It’s humiliating, for one,” said Shala, “because they see your record, and it’s automatically a problem for them. I don’t think his teachers understood how to deal with minority kids.”

Shala's son struggled at home and at school. After his arrest, she was overwhelmed by a complex legal system. "I had to deal with additional challenges with attorneys, who were making decisions on behalf of my child,” she said.

Shala's situation and subsequent list of questions are common for parents involved in the juvenile justice system. What are my rights? What is a juvenile court counselor? What is a Formal Accountability Agreement? What happens if my child is facing a Measure 11 charge?

Shala joined a parent group and compared notes with a dozen others who’ve gone through some of the same pain. The group began the first of 12 drafts of the parent handbook as part of county wide efforts to reduce community violence and recidivism, and keep youths from entering the justice system in the first place.

Parents hug each other at the launch of the Parent Handbook, a 48-page resource for parents with children in the criminal justice system.

“It is great for parents to have what they need,” Multnomah County Circuit Court Judge Nan Waller said. “But it’s really our ultimate goal for every member of this community to stand up and make sure that children aren’t coming into our juvenile justice system. And that ultimately you will put yourself out of business with the parent handbook and instead celebrate the successes it will give you.”

The handbook is printed in English and Spanish. It will be available for parents at the Juvenile Services Division in Northeast Portland. It’s also available through the Community Healing Initiative (CHI), a multicultural collaborative that includes the Department of Community Justice, Latino Network and Portland Opportunities Industrialization Center (POIC).

“Letting someone else know that you have walked through that fire and made it through is such an important way to give back to your community,” said Commissioner Lori Stegmann who also attended the recent event. “Thank you for your love of this community.”

Today, Shala's son is off probation and staying out of trouble, she said, after he was assigned to a juvenile probation officer and referred to the Community Healing Initiative.

He didn’t have to do any time but he had to follow the rules.

“I’m hoping people will see [the handbook] and speak with their kids about it and help them to prevent from getting in trouble. Because I let my kids know at the drop of a dime that you can walk out this door and your life can change.”

Jessica Morkert-Shibley is the communications coordinator for Multnomah County.