Power to the Workers 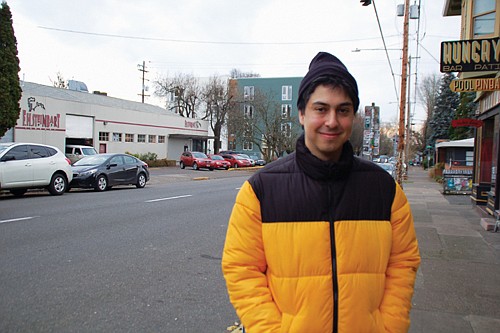 James Curry, 24, is an organizer for the Burgerville Workers’ Union, which recently got its third Portland area Burgerville restaurant to become federally recognized as a union shop allowing workers to bargain collectively for wages and working conditions, making Burgerville the only fast food chain in the nation to have unionized employees. Photo by Danny Peterson

Burgerville employee James Curry is on the front lines of a successful fight for workers rights and livable wages and he expects more victories in the New Year. Portland made history when workers at three area Burgerville restaurants voted last year for collective bargaining rights, the first fast food restaurant chain in the nation to have unionized employees.

Powell, and at the Burgerville serving Gladstone and Milwaukie. Many more shops beyond those three have prominent union committees, Curry said.

Curry, 24, works at the Hawthorne shop and has been an employee and organizer for the union for the past two years. He told the Portland Observer that despite some stress due to anti-union pressure he’s received from Burgerville management, he feels good overall about the progress made.

“The future's bright, excited about what's coming next. Both for my shop and the union as a whole,” Curry said.

Burgerville employees and supporters held their first ever picket at the Hawthorne Burgerville a few days after store employees voted, 13-9, to unionize. The main issue was a demand for Burgerville corporate offices to pick up the pace of its labor negotiations and offer counter-proposals in response to the union’s proposed $5 hourly raise for all workers, protections for undocumented workers, accessible health care, and 15 minute breaks.

The demonstration came amidst a companywide boycott that the union has held since February, and will remain in effect until corporate signs a fair contract, organizers said.

“It's taken many months to get two mild tentative agreements,” Curry exclaimed. “Burgerville is definitely dragging their feet and trying to make this take as long as possible.”

The delay won’t stop the solidarity of Burgerville employees, Curry said, despite efforts from corporate to pit employees against each other.

An anti-union flier, which claimed “union management” would “enforce dues” on its members spooked some employees, Curry said.

The union currently does not collect dues, Curry clarified, but may eventually incorporate that at some point in the future.

“That will only ever come after we get a raise, and it will [be] democratically decided by the union,” Curry said.

He regrets that the written distribution of company materials about the union organizing efforts seems to paint him and other union leaders as oppressive to their constituents.

“One of the most stressful things about the union-busting campaign is seeing the company putting in all these resources to paint me and other folks at my job as sort of untrustworthy, shadowy people, who have no relationship with our co-workers and who are out here just to get their money,” he said, adding that the description would more closely fit the actions of corporate officers.

Already, the union has been able to fight back against unilateral decisions handed down by Burgerville’s corporate offices. One such example came this fall when a company-wide ban was imposed against employees wearing buttons that expressed things like support for Black Lives Matter and undocumented immigrants.