A New Seat of Power 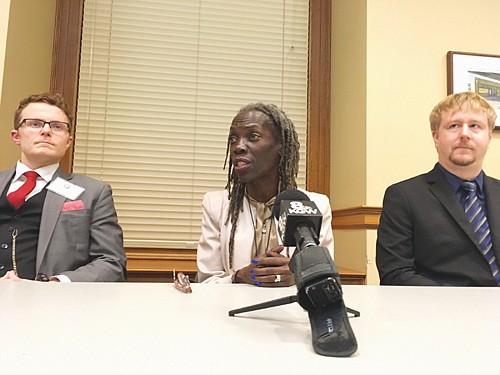 Political activist Jo Ann Hardesty introduces members of her staff on her first day in office as a Portland City Commissioner, the first African-American woman to hold the office and the third black city commissioner in City Hall history. Derik Bradly (left) is Hardesty’s policy director and Matt McNally is her community outreach director. Photo by Danny Peterson

Jo Ann Hardesty has taken office as Portland’s newest City Commissioner, a historic benchmark for the city both in terms of seating its first African American woman on the City Council and tilting the governing panel to a woman-majority for the first time in its history.

Hardesty, 61, is no stranger to City Hall, but mostly in the role of a long-time political activist and critic of city policies. On Jan. 2 she assumed political power for the first time on the five-member council following a November General Election victory over former Multnomah County Commissioner Loretta Smith. She replaces former City Commissioner Dan Saltzman who did not run for re-election after 20 years in office.

The Navy veteran, former state representative, and former Portland NAACP president, is the third African American to be on the Portland City Council, but the first since 1992. She has led a working class life, living in outer east Portland, and has volunteered on numerous non-profit boards, gaining a public following with her activism efforts for police reform.

Hardesty was sworn in by the first African American justice of the Oregon Supreme Court, Adrienne Nelson. She encouraged her supporters and others who filled the City Hall chambers to continue to hold elected officials, including herself, accountable.

“I look forward to what we’re going to be able to do as Portlanders together. And I want to remind you that this is only day one,” Hardesty said. “You need to come back to this chamber. If this chamber looked like this every day, what a difference the city of Portland would be.”

Hardesty’s first day in office came with a City Council session that began with some disorderly and disruptive visitors who had to be escorted out of the chamber shortly after she was sworn in. One of her first actions as a City Commissioner was voting to put in place the next steps for enacting an open and accountable elections measure that voters approved in the fall.

Mayor Ted Wheeler welcomed Hardesty to the council, calling her inauguration “historic.” He has given her oversight responsibilities for the Portland Fire Bureau, the 911 service departments, emergency management bureau, and firefighters’ pensions—the former assignments of Saltzman’s.

During a press meet and greet hours after her taking office, Hardesty cited houselessness as her number one priority, and spoke of working with the 9-11 Call Center to integrate more mental health professionals into the emergency dispatch and changing the way emergency responses are carried out.

”We’ve invested a lot of money in police. We haven’t invested that much in the 9-11 Call Center or the Fire Department or the Bureau of Emergency Services, and so having a conversation and highlighting that this is the rest of the public safety system, and we’re failing that system miserably, will help us be able to divert money to invest in those other parts of the system,” she said.

After congratulating Hardesty and offering his support, Mayor Wheeler cited the historical significance of her seat as a woman of color on the Portland City Council, and for women in government generally, in Portland.

“You will feel the pressure of that history, for better or for worse. You have my commitment to work with you and help you make that historic moment count for people in this community,” Wheeler said.