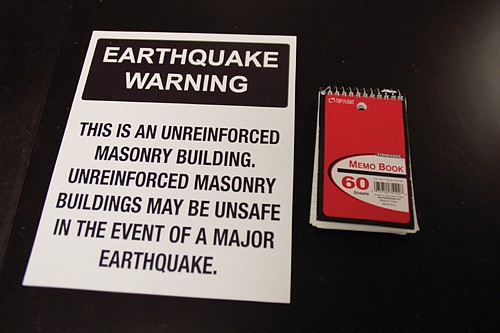 The Portland NAACP has new allies in opposition to a recent city policy requiring owners of unreinforced masonry buildings to post warnings signs on structures deemed to be at risk of collapse during an earthquake.

Local NAACP President Pastor E.D. Mondainé was joined Saturday by other community members and groups impacted by the placarding requirement, including a coalition of music venue owners—Music Portland, for a rally in front of City Hall, demanding the mandate affecting some 1,600 buildings be halted.

The Portland NAACP likens the requirement to Portland’s long history of white supremacy and where black people were displaced when urban renewal and economic development policies and projects helped gentrify historically black neighborhoods.

Leaders for the local civil rights group claim the earthquake warnings would devalue the impacted properties and even act as an impediment to improving the buildings and keeping them in current use, all under the guise of public safety for the benefit of speculative redevelopment.

“We will no longer allow these things to remove us from our community. We want action, we demand action, we want it now,” Mondainé said.

In addition to black churches made of bricks and masonry in Portland’s African American community, many well-known music venues like White Eagle, Crystal Ballroom, Dante’s and Kelly’s Olympian, would be impacted, according to Music Portland.

City officials said the placarding ordinance, approved in October, was part of an effort ultimately aimed at upgrading old buildings to withstand an earthquake.

But the NAACP says the policy will make it tougher for masonry building owners to get loans for improvements and will discourage investment. Instead, the group argues that the buildings will be sold, and developers will demolish and redevelop the sites, increasing the cost for residents to live there and forcing current residents out.