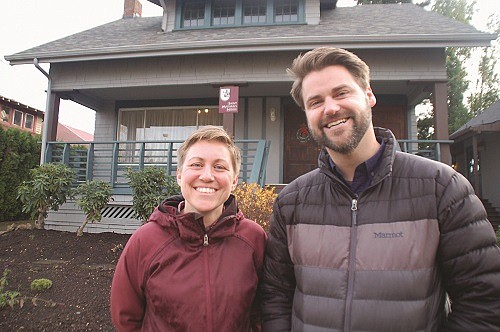 Sarah Loose (left) and Ron Werner look back on their experience of facilitating willing arrests of faith leaders during peaceful protests on behalf of immigrant asylum seekers. They’re part of Oregon’s Interfaith Movement for Immigrant Justice, an organization advocating for the rights of immigrants faced with family separation, detention and deportation. Photo by Danny Peterson

Interfaith Movement for Immigrant Justice, which convenes faith leaders of varying religions throughout Oregon, was one of the many grassroots organizations key to keeping the issue in the public consciousness through vigils, marches, and support in solidarity with the asylum seekers, both at the Oregon prison, and the federal Immigrant and Customs Enforcement headquarters in Portland.

All of the asylum seekers were men and a number of them had been separated from their children at the border. Most were applying for entry to the United States to escape persecution or violence from more than 16 countries. They were denied access to attorneys and not allowed to practice their religion when they were first detained.

The American Civil Liberties Union Oregon filed an emergency lawsuit soon after the immigrants were detained in Sheridan to allow them access to lawyers, which a federal judge sided with.

Another non-profit civil rights group called Innovation Law Lab represented 80 of the detainees and helped them demonstrate that they fled their home countries due to a credible fear of prosecution and all 124 of the asylum seekers have since been released, as of late November.

Rabbi Debra Kolodny, of Portland’s UnShul, experienced her first arrest as part of a civil disobedience action to persuade the regional field office director of the Immigrant and Customs Enforcement federal agency to release asylum seekers in a federal prison in Sheridan, Or.

For the leaders of the local Interfaith Movement, their involvement is akin to the arrests Rev. Martin Luther King voluntarily faced in actions of civil disobedience in the fight for civil rights. The local faith leaders were inspired to take on a similar course after one of its members hosted a living room meeting to discuss taking action. It was last May when news first broke that the immigrants were being detained in Oregon.

“That began a process of both discernment and strategizing around what would be an effective strategy to get the men released but also to begin to dismantle this family separation apparatus that exists here in Oregon,” interfaith organizer and pastor Ron Werner of the Evangelical Lutheran Church told the Portland Observer.

Werner and the other justice advocates began by holding prayer vigils, protests and marches outside of the Sheridan prison. They were joined by at least two other immigrant rights groups in Oregon, Unidos Bridging Community and the Rural Organizing Project.

By July there was finally some progress. With the help of the Innovation Law Lab, 80 of the asylum seekers were determined to be legally eligible for release, but they continued being detained.

The organization sent letters and made phone calls to Elizabeth Godfrey, the acting ICE field office director, but got no responses. That’s when the Interfaith Movement decided to escalate their approach by dispatching clergy members willing to risk arrest by engaging in civil disobedience.

Such a tool was strategized early on, Rabbi Debra Kolodny of Portland’s UnShul said.

Sarah Loose, also with the immigrant justice group said, “We knew that they were eligible for release and that it was Elizabeth Godfrey who had the sole power to be able to make that call.” Loose was a key organizer of the civil disobedience actions.

Kolodny, along with Rev. Michael Ellick and Rev. Barbara Nixon, would make up the first wave of faith leaders being arrested, starting Aug. 6, in what the group called the August of Action. The demonstrators went up to the door of the ICE Office on Southwest Macadam Avenue to deliver the letter, in person, to Godfrey. When there was no response, they linked arms with other demonstrators and blocked cars from being able to come or go. They then sat on the ground.

Rev. Michael Ellick at The Peace House at 2116 NE 18th Ave, which is an ecumenical community of faith. Ellick was one of the faith leaders who was willing to get arrested for a cause in a series of civil disobedience actions against the federal Immigrant and Customs Enforcement office in Portland.

Rev. Nixon, who serves First United Methodist Church in Corvallis, had put her body on the line with her colleagues, despite significant joint problems.

“I was quietly hoping that if they were going to arrest us, that it would happen sooner rather than later because it’s pretty tough sitting on the ground that way,” she recalled.

Within a matter of minutes, however, Homeland Security officers asked the faith leaders to leave. They refused, three times, and made it clear that they knew their actions were illegal. The three were put in handcuffs by federal police officers.

Reflecting on the use of such a public maneuver, Rev. Ellick, who previously lived in New York City for 18 years and was involved in the Occupy Wall Street protest in 2011, admits that getting arrested for a cause is not always effective.

“Civil disobedience doesn’t always make sense as a tactic. It’s a popular thing to do. It’s edgy. But we were really clear with ourselves this can’t be about catharsis,” he said. “In this instance, we felt helpless, frustrated, outraged and hurt by the country. And we narrowed in on a tactic.”

Though Rev. Ellick, Rabbi Kolodny, and Rev. Nixon were detained for less than two hours, and not brought into a jail cell during that time, the attention it brought to the issue was a success.

“It was symbolic pressure,” Rev. Ellick said. “And in our mind it, worked.”

By the end of the month, 30 faith leaders associated with the movement had been arrested--one of them twice. After the first couple of weeks of arrests, ICE starting to release the asylum seekers, but by the trickle. By the end of November, however, all 120 plus asylum seekers were out of the prison. 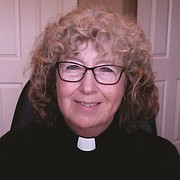 Rev. Barbara Nixon, who serves First United Methodist Church in Corvallis, was arrested for the first time as one of three faith leaders who refused to move from the vehicular entryway of the local Immigrant and Customs Enforcement office in Portland, in early August. The move was done as a civil disobedience measure to get asylum seekers locked in a federal prison in Sheridan, Or., to be released.

Werner said it’s hard to predict what’s next for the faith leaders with today’s political climate.

“We’re living in a time where a new policy could be handed down next month that’s even harsher or more inhumane, more unjust, than what we’re facing today. We’re finding great strength to keep pushing and to keep getting up and doing it even if next month might be harder,” he said.

Sarah Loose credited the group’s achievements to many organizations coming together, including St. Michael & All Angels Episcopal Church in northeast Portland, which provides office space support, ACLU Oregon, Innovation Law Lab, and others.

“We found our slice and went in there but the success of it as a whole was really because of that joint movement effort,” she said.