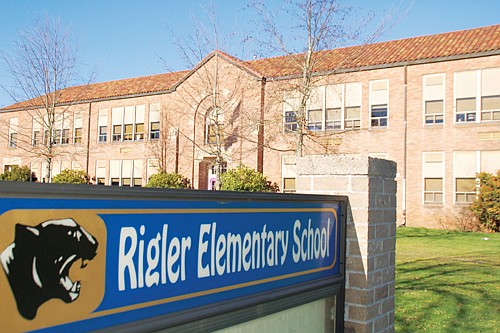 Rigler Elementary School in northeast Portland has endured high teacher turn around rates, a pattern that takes a toll on efforts to reduce the achievement gap between white and African American students, according to a new audit of Portland Public Schools from Oregon’s Secretary of State Dennis Richardson. Photo by Danny Peterson

A new audit of Portland Public Schools from Oregon’s Secretary of State Dennis Richardson revealed a staggering achievement gap in the district where African American students dramatically underperform their white counterparts, and where money is spent with little strategy or accountability.

The audit, released Jan. 9, determined there is a 53 percent achievement gap between white and African-American students in Oregon’s largest school district versus the 29 percent state achievement gap average.

A number of financial issues were cited in the report, including an insufficient oversight of contracts. The audit also determined that teachers at high-poverty schools had an average of one month of absences per year, they had a high turn-over rate, and that hiring rules gave high-poverty schools fewer qualified teachers to choose from than wealthier schools.

The audit cited Rigler Elementary School, located at 5401 N.E. Prescott St., which has endured four new principals in the last five years and had some of the lowest scores for state assessments.

Over the past four years, despite overall third-grade reading and writing test scores having improved slightly across the district, academic results for African-American and economically disadvantaged students have fallen in that same period, the audit found. All of this, despite Portland Public Schools having more funding-per-student than any other district in the state.

State Sen. Jackie Winters, R-Salem, a longtime black lawmaker and business leader who attended Portland Public Schools in her youth, said the increase in racial discrepancies was a “a demand for change.”

“I believe if we address the lack of financial transparency and monitoring of school spending, we will begin to see increases in teacher retention rates and focus spending on what matters-the children’s education,” Winters said.

One day before the audit came out, Portland Public Schools officials held a press conference preemptively criticizing its findings, arguing the report’s analysis, which captured data from the 2017-18 school year, did not reflect the progress the district has made in its systemic issues since the hiring of Superintendent Guadalupe Guerrero in October 2017.

The district, however, agreed with the audit recommendations.

"We are addressing each and every concern raised in the audit,” district leaders said in a statement.

Guerrero told reporters it's important to provide extra training, support, and pay to principals and teams of strong teachers at high-needs schools so they will stick around.

"This is going to take some work. But it's work we've already embarked on," he said.