Leader saw his arrests as last resort to negotiations 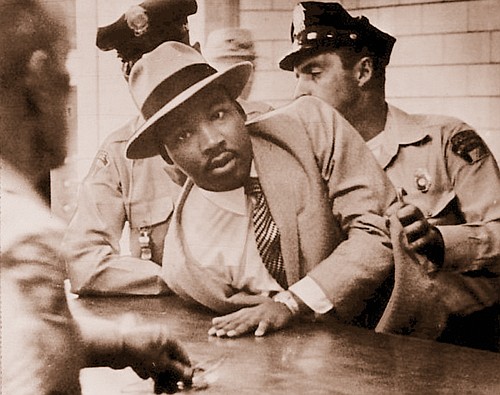 Dr. Martin Luther Kling Jr. being arrested for “loitering” while present at a colleague’s court case in Montgomery, Ala. in 1958. Photo by Charles Moore

In his “Letter from Birmingham Jail,” one of the late civil rights leader’s most articulate justifications for nonviolent resistance to racism, he responds to a public statement of concern and caution signed by eight white religious leaders of the South at the time.

It was in the immediate aftermath of a 1963 campaign by the Southern Christian Leadership Conference, of which King was president, against segregation and economic injustice in Birmingham, Ala., and the resistance involved occupying public spaces with sit-ins, and openly violating laws they considered unjust.

King was arrested early on in the campaign and from his cell composed the open letter.

King reaffirmed the fact that negotiation was the best means for progress on any matter, but clarified that civil disobedience was a last resort when those in power refuse to allow for discussions aimed at reaching a mutual agreement in the face of unjust laws.

“Nonviolent direct action seeks to create such a crisis and establish such creative tension that a community that has consistently refused to negotiate is forced to confront the issue. It seeks so to dramatize the issue that it can no longer be ignored,” he wrote.

King drew his philosophies from Christian theology and other nonviolent leaders throughout history, like India’s Mahatma Ghandi, who had successfully led his country to independence from British rule by employing civil disobedience.

The campaign in Birmingham was a success as Eugene Connor, the city’s police chief who authorized the use of high pressure water jets and police dogs against protestors, including children, lost his job and the signs designating segregation in local shops came down, opening the door for blacks to be accepted in public spaces.

Nationally broadcast news footage of those protests also crystallized the civil rights movement’s supporters, both for the whites who were shocked by the images and for black Americans. Today, King’s philosophies and actions have had a lasting influence on modern civil rights groups.