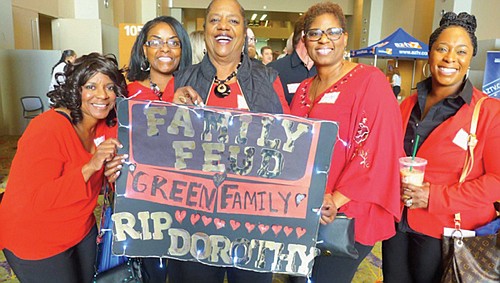 A family in Phoenix, Ariz. auditions to go on “Family Feud.” The hit TV game show hosted by Steve Harvey is now taking signups for auditions in Portland, coming July 27 and 28.

The hit TV game show “Family Feud” is coming to Portland this month to hold auditions for future contestants.

Since its premiere in 1976, Family Feud has been one of television’s most popular and enduring game shows. Featuring two families who compete for cash and cars, contestants try to guess the most popular answers to questions posed to 100 people surveyed.

As host, Steve Harvey engages the competing family members in hilarious repartee, and his honest reactions to their responses have brought a fresh sense of comedy to the show

The Portland auditions will be held July 27 and 28. Producers are looking for family groups of five related by blood, marriage or legal adoption. You’re encouraged to include pictures and a video with the application that can help you stand out. To apply, go to familyfeud.com/audition.