Our moral duty is to protect all children 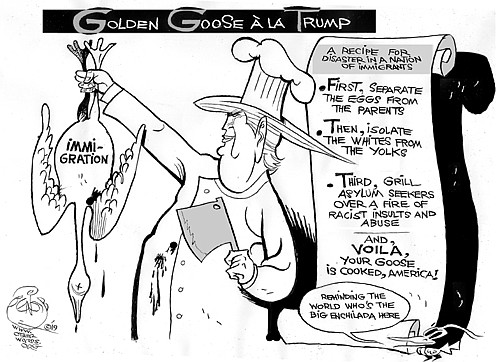 It is inconceivable that these latest headlines come from a civilized nation. “Detained Migrant Children Denied Adequate Food, Water and Sanitation in Texas.” “There is a Stench: No Soap and Overcrowding in Detention Centers for Migrant Children.” “‘The Taliban gave me toothpaste’: Former captives contrast U.S. treatment of child migrants.”

Exposing details of the inhumane conditions and neglect at the Clint, Texas Border Patrol station, the Associated Press recently reported:

Lawyers warn that kids are taking care of kids, and there’s inadequate food, water and sanitation for the 250 infants, children and teens at the Border Patrol station…Fifteen have the flu, and 10 more are quarantined. Three girls told attorneys they were trying to take care of [a] 2-year-old boy, who had wet his pants and had no diaper and was wearing a mucus-smeared shirt when the legal team encountered him…Law professor Warren Binford, who is helping interview the children, said she couldn’t learn anything about the toddler, not even where he’s from or who his family is. He is not speaking…‘In my 22 years of doing visits with children in detention, I have never heard of this level of inhumanity,’ said Holly Cooper, who co-directs University of California, Davis’ Immigration Law Clinic and represents detained youth.” Many children had not had access to a shower or changed clothes since they had crossed the border days or even weeks earlier.

Meanwhile Justice Department attorney Sarah Fabian argued in court that the federal government should not have to provide immigrant children with toothbrushes or soap to fulfill its legal obligation to provide them “safe and sanitary” conditions.

The spotlight on the inhumane treatment at the border comes just as the Trump administration is threatening to conduct mass deportation roundups of immigrant families, which will do real and lasting harm to countless children. This action, which the Children’s Defense Fund has condemned in the strongest terms, is the latest in a long string of actions by this administration meant to tear families apart and sow fear and panic among immigrant communities.

Deportations and family separations have dire consequences for children’s mental health and well-being, and they put enormous strain on communities—especially the already over-burdened child welfare system. That the U.S. Department of Homeland Security and Immigration and Customs Enforcement refer to this action as the “family op” reinforces this administration’s callous disregard for the children’s lives that will be harmed and the families that will be torn apart by these actions.

Targeting children and families in an effort to create fear among immigrant communities is immoral and runs counter to the values upon which this country was built.

We urge the administration to stop separating children from their parents and to stop imprisoning children in unsafe, inhumane conditions. We call on Congress to refuse to fund the Trump administration’s cruelty. And we urge state and local officials to speak out against this administration’s actions and equip their communities with the resources they need to support impacted families. It is our moral duty as a nation to protect and defend all children, regardless of where they come from or the color of their skin.

God, forgive our nation and help us to repent.

Marian Wright Edelman is founder and president emerita of the Children's Defense Fund.