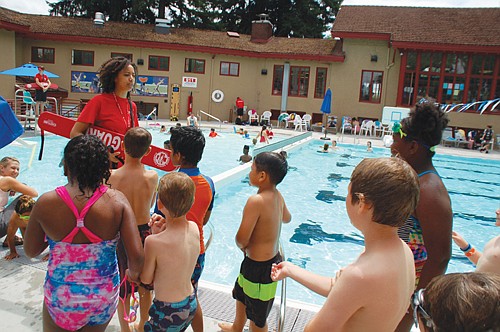 A lifeguard has some tips for young swimmers on how to complete the “swim test” to use the deep end on the first day of operations Monday at the new Peninsula Pool. The historically multicultural hub at North Rosa Parks Way and Albina Avenue will officially celebrate its recently completed pool reconstruction with a free grand reopening and pool party on Thursday, July 18 featuring free swimming, cake, and more. Photo by Danny Peterson

To celebrate the reconstruction of north Portland’s popular Peninsula Pool -- which reopened Monday -- Portland Parks and Recreation is inviting the community to a grand reopening celebration and pool party featuring free swimming, cake, a synchronized swimming performance, and other activities, coming Thursday July 18, from 12 p.m. to 3 p.m. at 700 N. Rosa Parks Way.

The $4.6 million pool renovations, which began last September, increased the capacity of the outdoor pool from 188 to 296 swimmers maximum, and added a wall between the deep and newly expanded shallow water areas, bolstering its ability to serve younger and less experienced swimmers.

“Peninsula Pool has a rich history of serving a multicultural community,” said Portland Parks and Recreation Director Adena Long. “And now the expanded pool is a place where even more neighbors, families, and friends can gather and make lasting summer memories.”

In addition, a lift to provide Americans with Disabilities Act (ADA) access to the lower-level classroom and dance studio spaces in the adjacent Peninsula Community Center was added, along with other improvements, upgrades made possible with the Parks Replacement Bond and Parks System Development Charges.

The pool will remain open until Aug. 25, when Peninsula Pool and all other Portland Parks outdoor pools officially close for the summer season.