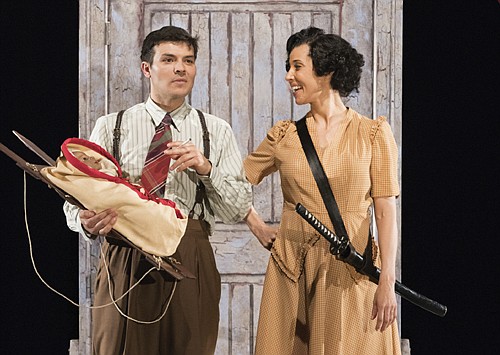 Derek Garza (Isaiah) and Shyla Lefner (Irma) star in “Between Two Knees,” a comedy that takes a fictional Native family through several generations of American history. The play was written by the 1491s, an intertribal indigenous collective known for sketch comedy, and is being performed at the Oregon Shakespeare Festival in Ashland. Photo by Jenny Graham/Oregon Shakespeare Festival

Over the next few weeks, I will get to all the reasons for making a trip to the Oregon Shakespeare Festival in Ashland before it closes in October. This week, I’ll begin with the best and maybe even most urgent reason to do so.

“Between Two Knees” is a feat of theater magic so satisfying that, after seeing it three times, I am determined to savor it at least twice more before it closes in October. Commissioned as part of OSF’s American Revolutions series of plays about significant moments in American history, this play packs in more hard-hitting historical truth than most other plays of any genre, though I don’t expect to read that description in the dominant culture media. It offers OSF’s predominantly white audiences a precious opportunity to absorb some neglected pieces of American history in an overheard comedic conversation among indigenous people—how indigenous people talk about you when you’re not listening. “Our mission has always been to make Indians laugh,” says one of the playwrights, Sterling Harjo. “If other people find us funny, then cool, but Indians are who we do this for.” And, as Larry (Justin Gauthier), who functions as the play’s host, remarks at the top of the action, “We’re gonna talk about war, genocide, PTSD, and molestation, so it’s okay to laugh.”

The play is the creation of the 1491s, an intertribal Indigenous sketch-comedy collective whose five members have been performing together for a decade. (Check out their YouTube channel for a sampling.) Some combination of spirits and ancestors must have engineered this OSF commission (not to denigrate the humans involved); the talent of this group of indigenous men is not the sort of thing that typically grabs backing from the dominant culture, and the group clearly is not angling for mainstream approval. In the tradition of Monty Python, the 1491s are adept at using comedy to sneak past our defenses the sort of truth we most want to avoid—like, say, war, genocide, PTSD, and molestation. “Between Two Knees” does that to genuinely hilarious effect, taking one fictional Native family through several generations of American history in between the 1890 massacre at Wounded Knee and the 1973 occupation of Wounded Knee led by members of the American Indian Movement (AIM).

Along the way, two Lakota men demonstrate contrasting vantage points that indigenous people stake in order to avoid annihilation, and the play’s protagonists, Irma and Isaiah, escape a brutal Indian school and make it their mission to free scores of other Indian children from the clutches of murderous molesting priests. The two go on to encounter a world-class cultural appropriator, to lose one descendent to World War II and nearly lose another to Vietnam, and to assist the AIM-led occupation. Since most accounts of Native American history (such as they are) stop at about the 1890s, the play covers a large swath of history unexplored in the dominant culture—and for all the humorous extremes depicted, the essential (and very extreme) facts are not exaggerated.

It would be a treat to see this play with a predominantly people of color audience—but since that is unlikely at OSF, I will affirm that I found seeing it with a majority white audience to be strangely healing, in its way. Watching a talented cast of mostly Native actors (who built this world premiere with the 1491s in a very unconventional process) put everything out there in service of such challenging material is inspiring; I felt that the show was built for me as a descendent of colonized people even before I learned that it actually was. And it was fascinating to wonder how the white audience members—who largely do seem to find the show funny—are absorbing what is happening. Will they be able to hang with it when the laughs are done? Probably not in many cases—but I also know that humor like this holds the potential of working like hypnosis does; it gives your brain something to work on even if you aren’t aware that is happening.

In recent years I have been increasingly curious about how relentlessly white Europeans sought to and, to some extent, did wipe out indigenous ways of knowing all over the globe. How much wisdom got lost in those countless murderous exchanges? Could it be recovered? The 1491s—whose very name nods to the year before Christopher Columbus arrived with other white European colonizers intent on executing their visions of Manifest Destiny—wrestle with just those questions in this play, from a vantage point of Native people defining themselves in powerful ways that contrast dramatically with the dominant culture depictions that have so diminished them in our eyes. The play closes with a comically insightful envisioning of how human evolution might rapidly advance if colonizers suddenly disappeared. “So long, white people,” they invite the audience to sing, an anthem that rings with comic, literal, and even spiritual significance. Humor borne of such clarity is the best of the reasons I know for audiences to head to OSF before the season closes in October.

Darleen Ortega is a judge on the Oregon Court of Appeals and the first woman of color to serve in that capacity. Her film review column Opinionated Judge appears regularly in The Portland Observer.