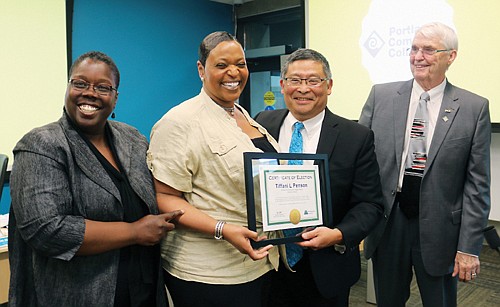 Tiffani Penson, an education advocate from the African American community and a city hall staffer promoting equity in city contracting has started her first four year term on the Portland Community College Board of Directors. On Thursday Penson took the oath of office from Oregon Supreme Court Justice Adrienne Nelson, the first African American ever to serve on the state’s highest court.

Nelson swore in all of PCC’s new directors during the special ceremony. Penson was elected by voters in May to represent PCC’s Zone 2, which covers north and northeast Portland and Columbia County.

A native Oregonian and the supplier diversity officer for the city of Portland, Penson’s responsibilities include outreach to disadvantage, minority, women, emerging small businesses and service disabled businesses.

She implemented and manages the Minority Evaluator Program, which requires city bureaus to include at least one minority evaluator from the community to serve on evaluation panels awarding formal contracts. She also serves on the board of Architecture Foundation of Oregon, Bound for A Cure, Kairos PDX, and Oregon Native American Chamber.