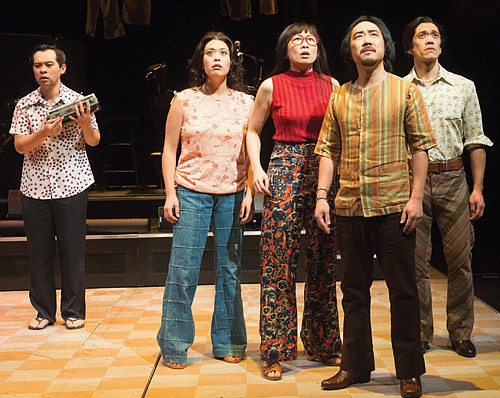 The Oregon Shakespeare Theater’s current production of “Cambodian Rock Band” is about the pop rock scene in Cambodia before it was destroyed during the Khmer Rouge genocide of the late 1970s. The play inspires homage to a lost culture and history, and incorporates songs by Dengue Fever, a Los Angeles based band whose lead singer was born in Cambodia and represents the vibrant music scene that disappeared. Actors pictured are Joe Ngo (Chum), Brooke Ishibashi (Sothea), Jane Lui (Pou), Abraham Kim (Rom) and Moses Villarama (Leng). Photo by Jenny Graham/Oregon Shakespeare Festival

Until I saw the marvelous play, "Cambodian Rock Band," running until October at the Oregon Shakespeare Festival in Ashland, I had no idea about the exciting pop rock scene that flourished in Cambodia just before its magic was utterly destroyed during the Khmer Rouge genocide in 1975 to 1979. Like the former Khmer Rouge official whose trial 30 years later becomes a focus of some of the play's events, the stories of that erased music and of the survivors of that genocide have been hiding in plain sight. We cultivate so little curiosity about what we could learn from our refugee neighbors and friends and, even in our own families, we know so little about the traumas experienced by loved ones separated by even a generation. We don't know how to look, and we don't think to ask.

This play offers an often exhilarating, frequently funny, and deeply moving encounter with some of what we have been missing about Cambodian culture and history. A family story, a musical exploration, and a plunge into the heart of darkness all in one, the play offers audiences several ways into stories that enrich and inspire.

Music was the way that playwright Lauren Yee found into this context, via a band called Dengue Fever. The band is based in Los Angeles and specializes in Cambodian pop and psychedelic rock. Its lead singer, Chhom Nimol, was born in Cambodia and is still beloved there. Inspired by Dengue Fever's music, Yee sought to build a play around the nearly extinguished musical and historical legacy which the band draws from; the Khmer Rouge killed an estimated 90% of Cambodian artists, and the country's vibrant music scene suddenly disappeared once the regime made listening to Western-influenced music punishable by death.

A more typical approach would have been a play where people talked about the musicians and the music was heard only in recordings. But Yee built something different. She and her collaborators found talented performers to create a rock band like the ones who were wiped out, and to arrange and play songs by Dengue Fever and prominent Cambodian artists who influenced the musical moment that was crushed in the 1970s. She then built the story around a fictional band of young people filled with excitement and hope, and then explores the tragic events that befell them. Their story is punctuated by the story of one of the band's members who is returning to Cambodia for the first time 40 years later, as his U.S.-born daughter is gathering criminal evidence against a former Khmer Rouge official. That family story offers a window into the sort of secrets that survivors of war often carry without telling their children.

The music does much of the heavy lifting in this play--it is playful and also full of longing, and the cast helps us feel in our bodies the joy and energy that animated this lost artistic movement. A standout among this extremely talented group is Joe Ngo, who met Yee while the play was in development and was cast to play a side character in an early draft. Ngo's own parents survived the Khmer Rouge and, unlike most survivors of such trauma, had shared with him stories of the atrocities they had experienced and witnessed. The experiences of Ngo and his family informed the way play took shape, offering audiences humorous and painful insights into the divides between generations that can be complicated to traverse. In the show's first production at South Coast Repertory Theater and again at OSF, Ngo plays the lead character, Chum, both as an older man in his 50s and also his younger self, who played in a band and was tortured in a labor camp. Ngo digs deep to offer a performance that is funny and strong and playful and desperate, a clear homage to his own parents and to a legacy that deserves respect and celebration.