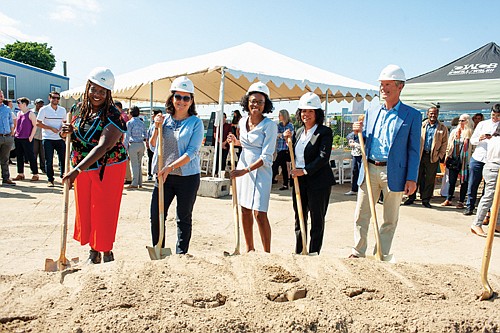 Meyer Memorial Trust, the second largest private foundation in Oregon, broke ground Monday for its new headquarters on the corner of North Tillamook and Vancouver Avenue, purposely moving into a historically black neighborhood that has faced waves of upheaval and displacement to better a community it supports and serves.

“Establishing a permanent home in historic Albina is one way to show Meyer’s commitment to building partnerships and connections that help to make Oregon a flourishing and equitable state,” DePass said. The Meyer Memorial Trust leader was hired last year, a former assistant administrator for the U.S. Environmental Protection Agency in the Obama administration. She is not related to newly elected Portland School Board member Michelle DePass.

Established by the late Fred G. Meyer of Portland, the founder of Fred Meyer stores, the Meyer Memorial Trust announced last year it was planning to move 50 employees from leased office space in the Pearl District to the new site. Fred Meyer himself lived in the neighborhood when he first established his business, foundation officials said.

The headquarters project is designed to strengthen the connections between the foundation and local communities, according to Meyer Memorial Trust officials. The building is designed to achieve a LEED v4 Platinum certification for sustainability and the use of locally available renewable materials. The plans also include a process for engaging women and minority owned firms in both the design and construction phases.