No Pension Funds for War

Letter to the Editor 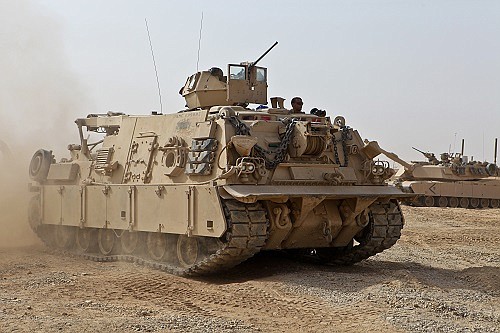 A U.S. military recovery vehicle rolls through an Afghanistan combat outpost in this U.S. Marine Corps file photo from 2011.

I recently retired as an employee with Portland Public Schools and had to decide what to do with 1 of 2 of my Public Employee Retirement Savings accounts - to keep it going or cash out. Because I couldn't stomach my money being invested by PERS in the stocks of the war machine, I decided to roll it over into a socially conscientious IRA at my bank. Now my other PERS account I have no control over and it sends me my monthly retiree payments. I am upset that a portion of this money comes from the war machine.

Excessive military spending is undermining the well-being of our communities and draining our non-military sectors. The Pentagon’s bloated budget accounts for over half of federal discretionary spending at a time when our communities are suffering, much of it going directly to private corporations. War is a tool for asserting military and economic dominance, and for protecting the interests of military contractors--not the lives of ordinary community members.

US military interventions and US-produced weapons have played a leading role in displacing millions of people around the world. Conservative estimates show the US interventions in Afghanistan, Iraq and Pakistan alone since 2001 have displaced 10 million people. The U.S. war machine must be held accountable for its role in creating the global refugee crisis.

Weapons manufacturers see a rise in their stock value when war and conflict increase across the globe. These corporations are literally making a killing on killing. Why are we underwriting their profit with the public funds in our cities, our public university endowments and our public employee pension funds.