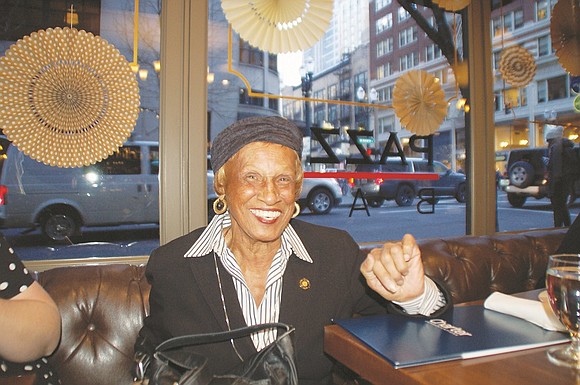 Sen. Jackie Winters, R-Salem, discusses her priorities in office during an interview with the Portland Observer in December 2017 after being named Senate Minority Leader by her Republican Senate colleagues. Winters who grew up in Vanport and Portland’s Albina community before embarking on successful career in business and politics that took her to Salem, died Wednesday, May 29, 2019 at the age of 82. Photo by Mark Washington

Jackie Winters, the trail blazing Oregon state senator who survived the Vanport Flood during childhood, grew up to become a small business owner in both Portland and Salem, and the only African-American Republican to be elected to the Legislature, died Wednesday at the age of 82.

The Oregon State Capitol in Salem will honor Winters with a memorial service on Thursday, June 13 at 1 p.m. in the Senate Chambers followed by a reception open to the public.

Winters served as a lawmaker from Salem since 1999, first in the House of Representatives, then in the Senate starting in 2003. She was vice chairwoman of the influential Appropriation Committee and was the first African American person to hold the post of Republican Caucus leader in 2017.

Winters had struggled in recent years with ailing health, having suffered a heart attack that put her out for the entire 2016 legislative session and announced in 2017 that she was undergoing lung cancer treatment.

Before becoming a politician, she founded a small chain of successful barbecue restaurants, called Jackie’s Ribs, located in the Salem and Portland areas in the 1980s and 90s.

Having grown up in Portland, Winters told Portland Observer reporter Beverly Corbell in December 2017 that it was emotional opening a restaurant “right smack in downtown Portland,” where years prior black-owned businesses were not wanted and where there were other restaurants that she and other African Americans were barred from entering.

Born in Kansas, Winters moved to the Portland area as a small child where she survived the 1948 Vanport Flood where the only possessions she had left were her dog, Tippy, and her doll.

Her family then found a home in the Albina neighborhood of north and northeast Portland.

A historic photo shows Sen. Jackie Winters as a child with her dog, Tippy, and her doll, the only possessions she had after surviving the 1948 Vanport Flood. A small business owner in both Portland and Salem and the only African-American Republican to be elected to the legislature Winters died May 29 at the age of 82.

Winters described the neighborhood’s African American participation in commerce and community gatherings at the time as “a lot of small businesses with over 100 social clubs.”

She said before the flood, Vanport was a vibrant, self-sufficient, and integrated town, “A total community and we had our own schools, had our own shopping centers.”

Winters previously worked for Republicans Gov. Tom McCall and later Gov. Victor Atiyeh, where she warmed to the political party that she remembered back then as the ones who got things done.

Among many of the causes she backed was criminal justice reform and civil rights. On April 18 she cast her final vote in the Legislature when she championed a significant criminal justice reform bill to pass in the Senate, which now awaits the governor’s signature, and would roll back mandatory minimum sentences for teenagers charged with violent crimes.

“Senator Jackie Winters was a trail blazer, a truly inspiring figure in the history of Oregon politics. Senator Winters believed, to her core, in justice and fairness. I am saddened by her passing but am deeply grateful that she lived to see the passage of youth justice reform last week.”

Winter’s family requests donations be made in lieu of flowers to one of the senator’s favorite causes including Oregon Capitol Fund, Liberty House, and Oregon Food Bank, which she is credited with helping form in the 1970s. The Office of Senator Jackie Winters can receive cards and remembrances for her family at 900 Court Street NE, S-301, Salem, OR 97301.