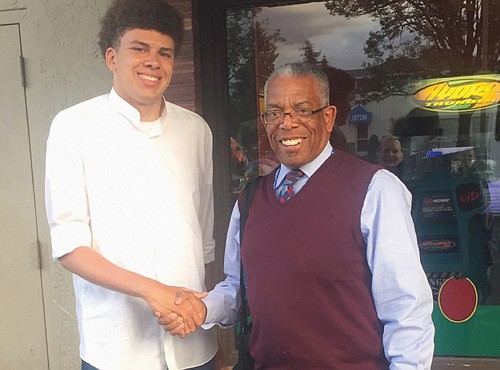 Madison High School graduate Taj Ali (left) is congratulated for becoming the Valedictorian of his Class of 2019, the highest-scoring senior academically, from long time educator and mentor Michael “Chappie” Grice.

Madison High School Senior Taj Ali is an incredible human. The graduate has been named Valedictorian of his class of 2019 becoming one of the few male African-Americans to achieve the highest academic honor in this history of Portland Public Schools and in the annals of Oregon high schools.

Ali’s hard work and consecutive years of dedication also has earned him several scholarships and other academic honors, including an award for exemplifying the value of equity at the northeast Portland school. Valedictorian is a recognition accorded to the highest performing senior in each high school class.

He is known for his quiet and affable personality, a humble demeanor and fierce pursuit of excellence, all of which have earned him the admiration of his brothers, his peers and the entire staff at school.

When asked his secret, he calmly says it was the support of his family, who never pressured him, and the “joy of the results of consistent effort to be the best.”

His mother Amina Ali, a retired and decorated teacher from the David Douglas School District, says, “Whether Taj becomes a great civil engineer, photographer, pilot or attorney he will be great, no doubt about it.”

Ali received offers to enroll at colleges as far away as Clemson, Penn State, the University of Massachusetts and others, but settled on the Clark Honors College at the University of Oregon in Eugene, where he plans to attend next fall.