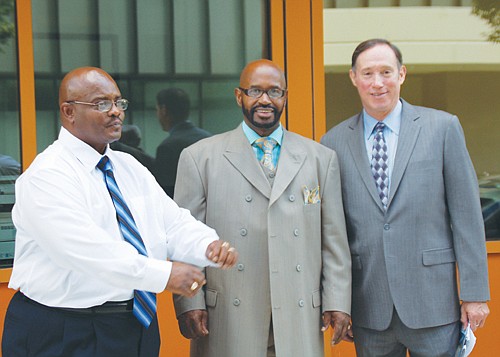 Michael Booker Sr. (center) is pictured in this Portland Observer archive photo from the 2016 opening of Miracles Central, a new affordable housing complex in the Lloyd District open to people impacted by homelessness, poverty and addictions. Also pictured are Robert Lyday (left), one of the first residents to move into the 47-unit building and former Portland City Commissioner Dan Saltzman. Booker died Friday at the age of 64.

A longtime advocate of the African American community of Portland passed away Friday after an unexpected liver cancer diagnosis just three weeks prior.

Michael Booker Sr., 64, most recently helmed the executive director position at the Miracles Club, a non-profit for recovering addicts of the African American community.

“The reaction is there is a lot of sadness. The community is mourning. What I’ll say just from my personal perspective is that everybody has a special story about Michael or about their relationship with Michael,” Liliana McDonald, who is the Miracles Club program director and also shares a child with Booker, told the Portland Observer.

McDonald confirmed that in late May Booker was diagnosed with liver cancer and found out a week later that it was very serious.

“He was an icon of the community,” McDonald added.

Before taking over as Executive Director of Miracles Club, located at Northeast Martin Luther King Boulevard near Skidmore Street, Booker worked at the House of Umoja, a residential gang intervention program, and Stay Clean, Inc., an addiction treatment facility.

Booker took the leadership position at Miracles Club in 2016, where he oversaw its substantial growth in the form of the non-profit opening a secondary residential location, Miracles Central in the Lloyd District. His leadership was needed after a previous executive director, Herman Bryant, was sentenced to three years in prison for embezzlement.

Booker was himself a longtime, card carrying member of the Miracles Club and served as a board member before then, during the organization’s infancy in 1993. He later grew into a mentorship role for others in recovery.

Booker had known for years the Miracles Club founders—Sam Brown, Johnnie W. Gage, and Johnnie A. Gage, the latter of whom has now taken up the mantel of interim Miracles Club executive director.

Miracles board member and friend of Booker Tim Wilson said the many hats Booker wore is how he was able to positively impact so many people’s lives.

“He was just a loyal, great man that left much too early,” Mark Bradley, Booker’s childhood friend, added.

Bradley and Booker’s fathers were friends, Bradley explained, having survived the 1948 Vanport Flood together and later both moved to northeast Portland, where their sons were born and raised. Bradley’s father owned a paint shop while Booker’s father owned the family’s janitorial supply store. Later, the sons took up the respective businesses of their fathers and helped each other out, lending equipment to each other for different jobs.

Bradley recalled that when his mother died, the always sharply dressed Booker took a new suit out of his own wardrobe and gave it to Bradley to wear during his mom’s funeral.

“He was just that type of guy. Had a heart of gold,” Bradley said.

Thomas Cooper, a chef at Heavenly Taste Café adjacent to the Miracles Club, told the Portland Observer Booker was his mentor in recovery and had known him for over two decades.

“He taught us how to live, pretty much to live life…He was a pillar in the community,” Cooper said.

Pastor Dwight Minnieweather owns the Heavenly Taste Café, which many Miracles Club members frequent, though it is a different business entity.

“It’s still kind of hard for me to come explain how I feel about it,” Minnieweather said, adding that the hole Booker left in the community has left people “scattered.”

“He was doing a whole lot.”

Minnieweather, who is a special events committee member of Miracles Club, had worked with Booker for different projects over the past 15 years.

“When Miracles was at this emergency point, he was the man who pulled us through the storm and got everything back in order.”

Minnieweather said he hoped Booker’s name could one day be dedicated to a future project of Miracles Club, like a library or building.

“I just really think it’s important for the word to get out to the people of how important he was to our community. I truly think that needs to be driven home.”

Booker was in talks to open an additional Miracles Center facility across the street from their current location, on Garfield Avenue and Mason Street, Minnieweather said. Like their previous two locations, it would include housing and mixed use facilities. A Miracles program in Gresham was also in the works.

A funeral for Michael Booker Sr. has been scheduled for Tuesday, July 9 at 11 a.m. at Vancouver Avenue First Baptist Church. 3138 N. Vancouver Ave. Arrangements are under the direction of Terry Family Funeral Home.

Editor's note: This post was updated with the official time and date for scheduled funeral services.