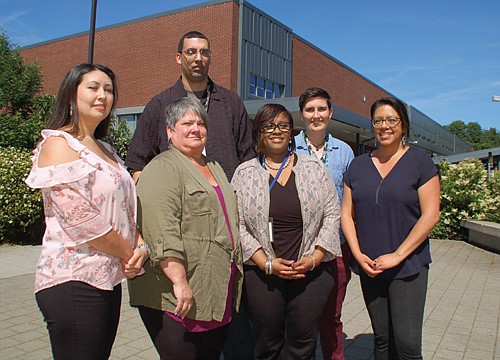 Representatives of Self Enhancement, Inc., the non-profit serving the African American community, and the Portland Water Bureau, are assisting qualifying low income households and those in temporary financial crisis with financial support to help pay their water and sewer bills. Pictured (from left) are Melissa Navarro of SEI, Anna McDonald of the Water Bureau, Sahaan McKelvey of SEI, Corbett White of the Water Bureau, Megan McGinnis of SEI and Fabiola Casas of the Water Bureau. Photo by Danny Peterson

Representatives from Portland Water Bureau and Self Enhancement, Inc. are on a mission to let economically struggling families know about the financial assistance options the city utility offers, which have been increased this past year.

The Water Bureau has expanded discounts for qualifying low income households and those in temporary financial crisis, opened a relocated and more transportation-friendly office, and established community partnerships with culturally specific groups, like Self Enhancement Inc., the non-profit serving the African American community of Portland.

All those actions spelled good news for Iva, a senior citizen who was living off of a fixed social security income when health issues brought her in and out of the hospital for a six week stretch. Her water bills fell behind and she accrued late fees, unable to do much else other than focus on her health.

Thanks to Water Bureau’s utility crisis voucher—which recently increased from $150 to $500—Iva was able to get back on top of her payments after she got well.

“We were able to help her out,” Melissa Navarro, an SEI Intake Coordinator, told the Portland Observer.

Navarro recalled others she’s helped in similar situations, including a single parent who had lost her job, living off of savings, and had been denied unemployment; and another single mom whose car, which she depended on to make ends meet working for both Uber and Lyft, suddenly needed costly repair.

“Personally, I just love my job because a lot of times people…you can see them getting teary eyed and cry, they’re just so grateful. I mean, I get hugs every week so it just feels good to be able to do that type of work,” Navarro said.

Though the utility crisis voucher can only be used per customer once per 12 month period, the Portland Water Bureau also now offers two tiers of discounts for customers who are at 60 percent—and 30 percent—median family income of Portland, respectively. One of the changes the utility recently made was to use city median family income, rather than go by state measures to better reflect local needs.

Though the program has been around since 1995, effective July 1 of last year, its services were enhanced under City Commissioner Nick Fish. The bureau is currently under the direction of City Commissioner Amanda Fritz.

That was also the time when the main customer service building of the utility changed from being downtown—which often incurred complaints of having to pay for parking or lack of accessibility for public transport from customers—to their new location at 664 N Tillamook St. Now there’s free parking and it’s along the Max Yellow Line and 35 bus line.

In addition, the agency has launched a partnership with Home Forward, Multnomah County’s housing authority, to provide up to $500 in rental assistance annually to income-qualified renters living in a multi-family dwelling and at risk of eviction.

“Many people who live in apartments never get a water bill or water and sewer bill. So how do you give a discount to someone who doesn’t receive a bill? We figured out a pathway to do that for people that are in crisis, that are risk of eviction, by partnering with Home Forward,” said Portland Water Bureau Public Information Officer Jaymee Cuti.

SEI, which is one of seven community partners the Water Bureau works with, helps their clients get connected to benefits such as these for families who are struggling financially.

“Really we try and prioritize making people who are coming in for energy assistance more of a one stop shop,” SEI Energy Program Manager Megan McGinnis said. ”If someone’s coming in, [we] just have them bring that water bill with them. And then we can enroll them in their bill discount as well. Kind of saves them an extra trip.”

McGinnis added that SEI does this by completing the verification of income and other qualification measures on behalf of the Water Bureau.

“[W]e try to make sure that our staff, before providing any form of energy assistance, are having a more comprehensive conversation about what might be creating that need,” explained SEI Director of Community and Family Programs Department Sahaan McKelvey. “We’ll be as thorough as we can…trying to get behind some of the root causes of why a family may be struggling with being able to [pay their] utility bills.”

McKelvey said he’s very appreciative of the steps that local agencies like the Portland Water Bureau are taking to create assistance opportunities for people, but that there’s more work that needs to be done for multi-family units “to make that system more ideal and accessible as it needs to be for the families that are trying to tap into it.”

Portland Water Bureau Financial Assistance Program Manager Corbett White, who has worked at Portland Water Bureau for 27 years, now oversees two other employees tasked with assisting customers with financial assistance inquiries—additional positions that were part of the enhancements that were enacted last year—when before only one person did the job.

She recalled a case where a woman was devastated by becoming involved with the payday loan system.

“She was a single mom facing her water being shut off. And she said it’s not that I don’t make money, it’s just that they get the money before I do. And I was able to turn it around for her,” White said.

She added that it’s those moments of positively impacting customers’ lives that gets her excited about coming into work each morning.

“There’s a lot of people out there that are having a rough time financially. If they give us a call, there’s ways for us to help and that’s the message that we want.”

White said there’s two numbers for Portland Water Bureau customer service inquiries: a general line at 503-823-7770 where payment arrangements, such as monthly installments, or an explanation of the bill can be provided. Inquiries requiring more attention from the financial assistance specialists’ line can be reached at 503-865-4357. Customers can also receive service by visiting a partnering organization, like SEI, or visiting the utility in person at 664 N Tillamook St., or online at portlandoregon.gov/water/.