Films from All Over the Globe 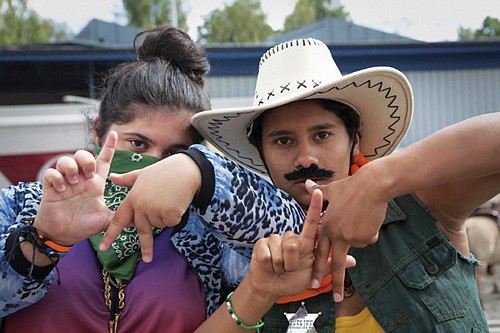 A pair of rebellious teens (Zahraa Aldoujaili and Yara Aliadotter) discover the power of filmmaking in ‘Amateurs,’ a cross-generational comedy from Swedish writer and director Gabriela Pichler. The film kicks off the Portland International Film Festival on Thursday, March 7.

My favorite part of the Portland year has arrived! The Portland International Film Festival (PIFF) begins two weeks of screening films from all over the globe this Thursday with its opening night film, "Amateurs," a cross-generational comedy from Sweden. Most weekdays during PIFF it is possible to see three films per day and one can see four on the weekends.

Every year, I see films at PIFF that never get a theatrical release, and often those films rock my world and end up on my list of the 10 best films of the year.

If you're a glutton like me, your best bet is to buy a festival pass, which gives you lots of flexibility to see whatever is playing at a particular venue (Whitsell Auditorium, Fox Tower, Cinema 21, Cinemagic, and OMSI). But you can also easily sample by buying individual tickets. If you go that route, buy online ahead of time at nwfilm.org to secure a spot.

I've missed most of the press screenings as yet but can recommend two films to consider: "To Late to Die Young," from Argentina, is a close observance of the coming-of-age of two teenagers shakily crossing the threshold into adulthood. The film is inspired by director Dominga Sotomayer's own experience spending her holidays in a rustic and close-knit community of artists, musicians and performers living off the grid outside Santiago in 1990. It's a languorous space with lots of room for kids to experiment with shifting identities. The film is specific in its observation of adolescent self-consciousness, but not ground-breaking. There is not much in the way of plot, however, this film offers a nice combination of universal themes and very specific time and place. In Spanish, it plays on Friday, March 8 and Wednesday, March 13 at Cinemagic.

This year's only Italian film is "Dogman," about a dog groomer, Marcelo, with a gift for working with even the wildest dogs, but who has met his match with a local hellion who drags him into more and more dangerous situations. Its star won the Best Actor award at Cannes last year for this performance, and he is quite captivating to watch--a mixture of impressionable and, in the end, determined, though not to a well-conceived purpose. Director Matteo Garrone (Gomorrah) has a particular gift for capturing traps of male identity, and this film, if you can handle some violence, is a fascinating character study. It plays at Cinema 21 on March 16 and 20.