Groups align against I-5 expansion 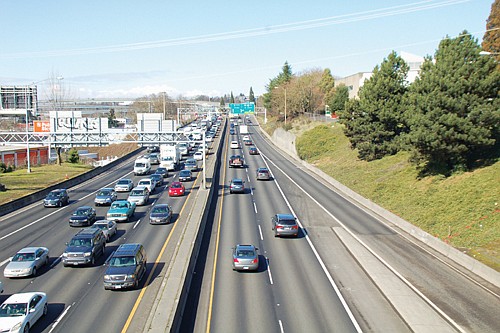 I-5 traffic in Portland’s Rose Quarter near Harriet Tubman Middle School (behind trees at right). A plan to widen the freeway to ease congestion is moving ahead despite opposition from parents of the school and other groups concerned about air pollution and an increase in vehicle emissions. Photo by Danny Peterson

A coalition of dozens of organizations, small businesses, and Portland community members are worried Oregon Department of Transportation’s proposed Rose Quarter freeway project will further worsen the air quality of nearby Harriet Tubman Middle school, among other concerns, despite a recent environmental assessment from the state agency claiming the opposite would occur.

“Myself and other parents from Tubman--especially the other members' parents of the PTSA--we definitely think it's a bad idea for them to expand a freeway, pretty much behind or close to the school Tubman. I definitely believe that the air quality wouldn't be good for our kids as we're already experiencing bad air there,” Tadimika Edwards, president of the Tubman Middle School Parent Teacher Student Association told the Portland Observer.

Edwards is also part of the No More Freeway Expansions coalition, a group that slammed ODOT’s recent claim that the proposed $450 billion widening of Interstate 5 for a larger segment of roadway in the Rose Quarter district—among other modifications--would actually benefit air quality, decrease carbon emissions, and shorten travel time. The main premise being that a wider freeway in this section will match up to other segments of I-5 and decrease emissions from idling cars and trucks.

The coalition vehemently disputes the claims.

“These findings fly in the face of decades of research in the field of public health, transportation planning and carbon mitigation, and contradict the numerous headlines we’ve seen in local and national newspapers throughout the past eighteen months,” the coalition said.

Not one urban freeway expansion in North America has successfully lowered congestion levels, due to a phenomenon known as “induced demand,” according to the group’s website. The project, which received funding through a 2017 statewide transportation package, would add auxiliary merging lanes throughout the 1.8 mile area broadly between the I-84 and I-405 interchanges on I-5, as well as 12-foot shoulders on both sides of north and southbound travel lanes to make way for emergency vehicles or for minor collisions to be dealt with.

Those additions would cut further into a hillside near Tubman middle school, which is already perched adjacent to the highway, according to a video commissioned by the coalition that used ODOT’s own schematics. A Portland State University study completed back in April warned against Tubman kids playing outside for extended periods, especially during high traffic times, due to the current poor air quality. Linda A. George, one of the PSU scientists who conducted the study, told Willamette Week that widening I-5 could result in higher concentrations of the pollutants from vehicle exhaust—which include arsenic and petroleum byproducts--and that they could extend further onto the property.

The coalition’s stance is that congestion pricing—also known as variable tolling--should be enacted as a way to reduce congestion, instead of widening the freeway. Coalition spokesperson Aaron Brown told the Portland Observer the tolling can be enacted in a way similar to TriMet’s low income fare program: discounted or free fares for those who are low income.

He said congestion pricing discounts based on income could mitigate the disproportionate impact the tolling would have on low income communities located near inner north and northeast Portland, such as those who attend Tubman, which has 48.9 percent of its students qualified for free or reduced price meals and is over 68 percent students of color.