Films to Watch or Avoid at PIFF 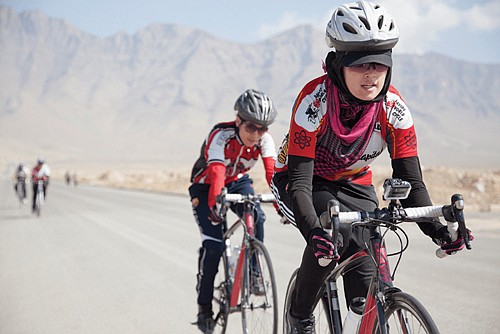 Competitive cycling opens a world to Afghan women in “Afghan Cycles” one of the documentaries to watch at this year’s Portland International Film Festival. Photo by Danny Peterson

Now that the Portland International Film Festival (PIFF) is in full swing, here is a sampler of films to watch for (or avoid, depending on your perspective).

I was worried that “Afghan Cycles” would be the sort of documentary that exploits stories of oppression to foment feelings of superiority in American audiences. I suppose that will likely still happen, but I wouldn’t blame this film, which mostly lets Afghan women speak for themselves about how competitive cycling opens their worlds and why they are willing to pay such a frequently high price to train and compete. They face violence and criticism that is honestly baffling, but emerges from this examination is a more specific and nuanced portrait of Afghan life than we usually get in the West, including some historical context and some examples of men who support and even admire these women— and rightly so. It plays on Friday, March 15 at Fox Tower.

"Winter Flies" is beguiling in its low-key way. Two teenage boys encounter each other while both are running away, apparently evoking no concern from any caring adults--and embark on a road trip across the Czech Republic in a stolen Audi. Their immaturity and determination keep them plowing forward, as hard to stop as winter flies--and occasionally as annoying, though each definitely has his endearing moments. The film made me wish for the little-boys-with-good-hearts who are still visible, but being overcome by their unrealistically "adult" visions of joining the French Foreign Legion and bedding a young hitchhiker. The film plays Sunday, March 17 at Whitsell Auditorium and Monday, March 18 at Cinemagic.

"Chained for Life," written and directed by American Aaron Schimberg, means to probe our unspoken assumptions about beauty and deformity with a story of the making of a film-within-the-film starring typically beautiful actors and adding (and arguably exploiting) disabled and deformed actors. It succeeds in some ways; though self-conscious and affected, revolving the story around the shoot helmed by a Werner Herzog- like director, the film displays a good understanding of the ways that disabled folks and those who don’t fit norms of beauty are othered. By constantly shifting settings and perspectives, Schimberg means to question what we find credible or sympathetic--and what makes us cringe. Still, the film somehow also lacks a point of view and a heart. It plays at Whitsell Auditorium on March 13 and 14.

"The Heiresses" offers an unusual window into privileged Paraguayan society. Two women from wealthy backgrounds face reduced circumstances and legal troubles and are forced to sell off furniture and fixtures. When Chiquita, the more adaptable of the two, is imprisoned for fraud, depressed and isolated Chela begins venturing out of her comfort zone to drive wealthy friends to their various amusements. This is the sort of film my sweetheart used to refer to as depicting a slight shift in perspective-- but there are some interesting observations here about longing and being stuck. It plays at Whitsell Auditorium on March 16 and Cinemagic on March 21.

Tickets, passes, and information are available at nwfilm.org. Darleen Ortega is a judge on the Oregon Court of Appeals and the first woman of color to serve in that capacity. Her movie review column Opinionated Judge appears regularly in The Portland Observer. Find her movie blog at opinionatedjudge.blogspot.com