Carving a path on and off the field 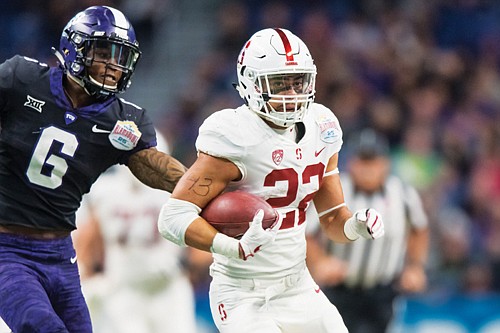 Cameron Scarlett (22), a star running back at Stanford University, grew up in northeast Portland where he attended Holy Redeemer School and played football for Central Catholic. He just completed a breakout year at Stanford. Portland writer and native son Paul Marshall Jr. writes on his plans for the future both on and off the field. Photo contributed by Stanford University

Whether as a running back for Stanford University or as a student preparing for his future, Cameron Scarlett has always been carving his own path.

Four years ago, Cameron was preparing to take the football field with his older brother Brennan (now with the NFL Houston Texans) for the first time ever as teammates. Fast forward to New Years Eve 2018, when Cameron found himself honored as the Most Valuable Player in a 14-13 victory against Pittsburg at the Sun Bowl in El Paso, Texas. He’s set to graduate this spring.

I had a chance to catch up with the younger Scarlett to talk to him about his Stanford stint and upcoming graduation:

Last time we talked, you were heading into Stanford to play with your brother and now you’re a few months away from graduating… Where did the time go?

It’s been a crazy experience. One of my teammates said early on that the days go by fast.

You had some tough games this season but Stanford finished the season strong winning the last four games. Talk about this past season a bit?

All the losses were close. We knew the end of the season was going to be harder than the start. We try to take things one game at a time and focus on the big picture. We also wanted to make sure that we send out the seniors on the right foot.

It was a good and satisfying to get the win. It’s something we call tangible evidence…a gratifying and hard-fought game.

Coming into the game, there was some of the talk about how players were opting to sit out including starting running back Bryce Love. How did you approach the game?

Bryce is a great running back. As for his decision, I can’t really control the situation, I had to come ready to work and be ready to play.

Portland’s Cameron Scarlett, a running back at Stanford University in California, drives into the end zone for a touchdown against Notre Dame in this Nov. 25, 2017 photo from AP.

In addition to your MVP performance (22 carries, 94 yards and 2 touchdowns), can you talk about your fumble recovery in the end zone that pushed the Cardinal on top, 14-13?

It was a bang – bang play. I knew something was up when he (Stanford quarterback K.J. Costello) didn’t hand the ball off. So I look back and I see the ball was coming right to me.

You’ve played in four different bowl games (Rose Bowl, Alamo and Sun Bowl twice), how has the experience been?

Bowl games are cool. They’re a great finale for the season. You prepare so long for them and then it turns out to be this hard fought game.

How has your Stanford experience been so far? What are you studying and what are your future plans?

All four years went by fast…. I’ve enjoyed my time. I’m graduating this spring with my degree in Science, Tech and Society. I’ve only got four more core classes required: two this quarter and two in the spring. I get to take classes from different majors: economics, science and business. My focus is on innovation and organization. I’m a creative person… I know it sounds cliché but I think outside the box. I have an interest in tech stuff like computer science. I’m also taking an interest more into the business world.

A few years ago, your brother was also in grad school and had a year of playing left and now he’s with the Houston Texans. What kind of advice has he given you?

Enjoy this time. You won’t have this time again for your life.

I’ll apply to graduate school. (Cameron has since been accepted into Stanford’s master’s degree program in communications). I’ll still have a year left of football because I decided to redshirt my freshman year.

The author of this piece, Paul Marshall Jr. is from Portland and a graduate of the University of Oregon’s Professional Master’s program. His relationship with the Scarlett family dates back to the 2000s when he attended north Portland’s Holy Redeemer Catholic School with both Brennan and Cameron Scarlett.