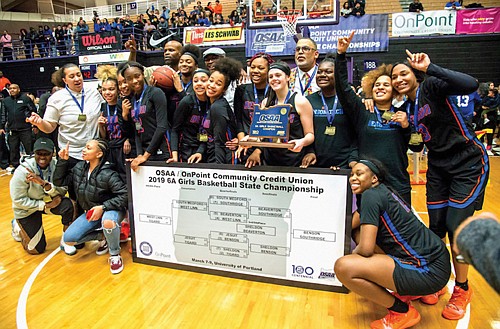 The Benson High School girls basketball team are state champions, a first for the school’s female team after they defeated two-time defending champion Southridge, 66-42, on Saturday at the 6A tournament at the University of Portland.

The Techsters dominated Southridge throughout the contest, showing perfect team execution under coach Eric Knox. It marked a reversal from last year, when the Beaverton school defeated Benson, 46-27, in Benson’s first trip to the finals in school history.

The tables seemed to turn Saturday, when Benson secured an early lead and kept it the whole game. Senior Ciera Ellington, the Portland Interscholastic League Player of the Year, led Benson, with 20 points, eight assists, six rebounds, three steals and a blocked shot.

“This means a lot not just to Benson, not just to the PIL, but for young girls that look like us, black and brown girls in Portland, this is for them,” Ellington said.

Also at the UP Chiles Center, the Jefferson boys basketball team reached the 6A final for the second year in a row, but lost to Jesuit 71-66 to finish runner-up.