Film Fest is Window to World 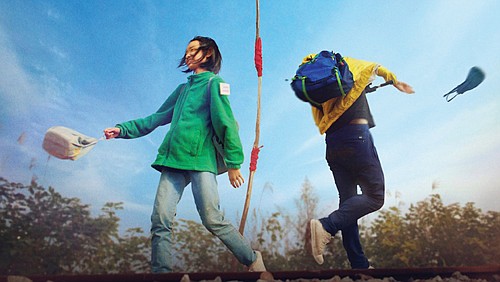 First-time writer-director Qui Sheng explores connections with time and nature that feel endangered by “progress” in his film “Suburban Birds” which plays again on Wednesday, March 20 at the Portland International Film Festival.

As the Portland International Film Festival enters its final days, there are still some noteworthy offerings--and a few of the films that have finished their festival run are worth watching for in theaters or online.

Among the films you can still see, "Suburban Birds" rewards the investment of attention and imagination necessary to appreciate its poetic approach to storytelling. First-time writer-director Qui Sheng tells two parallel stories, the first involving a team of land engineers attempting to investigate a tilt that has compromised new construction, and the other involving a group of children, in the same space but possibly not in the same time. The sensitive man and boy at the center of each respective story has the same name and may be the same person--and in its enigmatic way, the film explores connections with time and nature that feel endangered by what humans tend to view as "progress." It plays on Wednesday, March 20 at Fox Tower.

The screening I saw of "Donbass" generated a lot of interest, perhaps from people who are fans of celebrated Ukrainian director Sergey Loznitsa or are more familiar that I am with the conflict raging in eastern Ukraine's Donbass region. In 13 shifting settings, the film depicts stories of corruption and sectarian violence so disturbing that one feels they almost belong in a different time. Journalists, soldiers, people living in abject poverty and others enjoying cartoonish wealth, staged fake news and community brutality that resembles scenes from Nazi Germany--it all adds up to a disturbing picture of the lowest human behavior that made my blood run cold. It's playing again on Thursday, March 21 at Fox Tower.

My favorite film of the festival so far--and an early candidate for my list of the best films of 2019, is PIFF's Opening Night feature, "Amateurs." Set in a fictional small town in Sweden, this film's depiction of the town council's bid to be chosen as the site of a German big box store is an excellent backdrop for a funny and uncommonly wise exploration of experiences common to immigrants and outsiders. Clearly the brightest mind on the town council is Musse, whose family immigrated to Sweden from South Asia; in meetings, he is the one with ideas, energy, and optimism. Given limited budgets, he comes up with the idea of enlisting local high school students to make a film that will make the town's case for itself--but that enterprise mostly serves to awaken the unshakeable interest of Aida and Dana, two girls who are also children of immigrants and who have a lot of ideas for a film about their quirky adopted home. Director and co-writer Gabriela Pichler smartly uses the occasion of trying to win a "prize" of European culture to celebrate the perspective of three outsiders, to show how the stakes of using one's voice vary in different communities, and to illustrate some of what we miss when white supremacy homogenizes some voices and erases others. This delightful film is available for streaming on iTunes and Amazon.

"Transit," from German director Christian Petzold, begins a regular run at Cinema 21 in Portland on Friday, March 22. Working from a 1944 novel about people fleeing Nazis during World War II, Petzold sets the story in modern-day Marseille. No specific conflict is named, but the police presence and anxiety over citizenship translates believably to an imaginable time of tension in Europe (or the U.S, for that matter). The film centers around Georg, trying to escape France, who ends up almost accidentally assuming the identity of a subversive author who has killed himself. Yet the back stories of Georg, the author, his estranged wife, her lover--all remain opaque in a time when people are reduced to their ability to move. It's an interesting concept, well-executed, suggesting how quickly our relationships to movement, time, legitimacy and love can be thrown into chaos.

I expect that "Shadow," a gorgeous martial arts epic by the great Zhang Yimou (whose prior work includes "Hero" and "House of Flying Daggers"), will also have a theatrical run in Portland and will eventually be available online. The story here involves a series of conflicts--between kingdoms and disputed territory, between a king and the highly respected commander of his armies, and between the commander and the man who was chosen as a child to serve as his double (his shadow) in order to minimize the dangers the commander must face. The ruse has worked well for years, with only the commander and his wife, Madam, aware of it. But as the commander's health deteriorates and the political stakes are raised, gorgeous battles ensue. Zhang uses a palate of mostly desaturated grays and blood red, with resplendent costumes and intense zither music, to create a stylized world of intrigue, beauty and bitter conflict. See it on the big screen if you can.