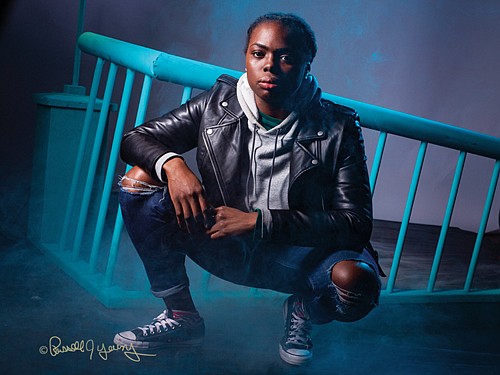 Portland’s Andrea Vernae stars as Fay, a young woman grieving the death of her mother in ‘Jump,’ a world premiere play that addresses the taboos surrounding mental health, particularly in black and other communities of color. The production is co-produced by the local black theatre group Confrontation Theater and Milagro, Portland’s Latino theater group. Photo by Russell J Young

Knocking down taboos surrounding mental health, particularly in black and other communities of color, is the driver behind a new theatrical production by an African American playwright that gets its first showing in a world premiere at Milagro Theatre.

‘Jump,’ by Charly Evon Simpson and directed by Portland’s La’Tevin Alexander is presented as a co-production between Milagro and Confrontation Theatre, a theatre group Alexander formed three years ago to present plays about the African diaspora and provide black youth access and opportunities to creatively express themselves.

Alexander has starred in the TV series Portlandia and Grimm and played Muhammad Ali in the 2018 Oregon Children’s Theatre production of “In This Corner: Cassius Clay.” He moved to Portland after finishing up his Theatre Management course work at Florida A&M University. Simpson is a playwright, performer, and educator from New York City.

Her play ‘Jump’ addresses the all too familiar story of family, fantasy and mental health. Set on a bridge that spans a deep gorge, 20-something Fay is reeling from the death of her mother and looking for solace, but what she finds is a journey of self-discovery. Portland actress Andrea Vernae of Confrontation Theatre plays the lead role.