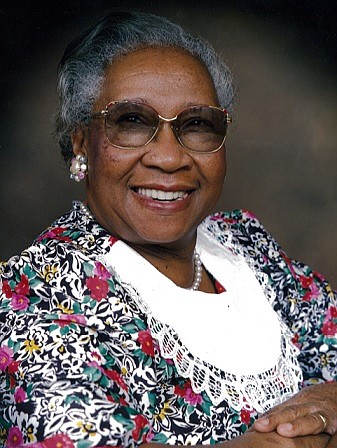 Annie Isabell Jennings (Hayes) passed away March 6, 2019 at the age of 96, surrounded by family at her longtime north Portland home.

She was born Nov. 30, 1922 to William A. Hayes and Minnie Jackson in Forest Green, Mo., but spent the bulk of her growing up years in Sioux City, Iowa where her father, a deacon tended a farm and her mother took special pride in fixing large dinners to bring townspeople together.

She married Meade Lee Grier Sr. in Twinsburg, Ohio with whom she had two of her children. After his passing she returned to Sioux City, and then, shortly after the 1948 Vanport Flood, she would follow the man she would later marry for life, Army serviceman Vernon Jennings, thousands of miles across the country to make a forever home in Portland. The two joined in union in 1952 and welcomed four new children into their family.

She spent years working in canneries, and many years more as a homemaker, sometimes walking miles to get to job sites during a time when buses didn’t run so well; She also didn’t learn to drive until her 50s. When she finally did get her license, she shared a special love for her Chevy Malibu and did not stop driving until well into her 80s.

She was a devout follower of Christ, and had no problem letting folks know. One of her favorite things to tell people was to “keep looking up,” and she would often depart by telling folks “see you in the funny papers.”

Annie also knew the importance of service. For many years she served as a Girl Scouts leader, a position she took a lot of pride in. Additionally, she spent many campaign cycles at the County Elections Office making sure every vote got counted.

Bringing people together was one of her favorite things to do, whether through block parties, New Year’s breakfasts or impromptu family dinners. When Annie said come, you come.

She is survived by sons Mardas, Ricky and Jimmy Jennings; her daughter and longtime caretaker Cheryl Jennings; sisters Telsia Hayes and Viola Sanders; along with a host of grandchildren, great-grandchildren, family and friends.

She will be greatly missed.