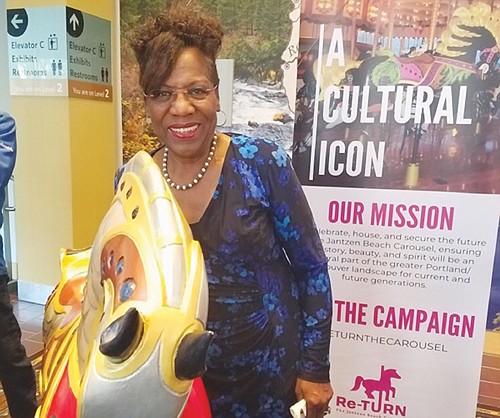 Former Sen. Margaret Carter of northeast Portland is co-chair of a committee that wants to re-incorporate the historic C.W. Parker carousel from Jantzen Beach into a new public attraction such as along the waterfront, downtown or in urban park setting. Carter is pictured with one of the horses from the 1921 carousel, which was disassembled and stored away in 2012 when the Janzen Beach Mall was torn down and redeveloped. Before that it delighted families for generations at the former Jantzen Beach Amusement Park.

“Returning the Jantzen Beach Carousel to the Portland/Vancouver metro area is a development opportunity of historic proportions. An opportunity like this only comes around once in a lifetime,” said Peggy Moretti, executive director of Restore Oregon.

Moretti said her group has already held productive conversations with government officials, developers and property owners in both Portland and Vancouver, but is eager to connect with other potential community partners. “We don’t want to leave any stone unturned,” she said.

Former State Sen. Margaret Carter, co-chair of the Jantzen Beach Carousel Blue Ribbon Committee, spoke passionately about the importance of having a public attraction that is affordable.

“For generations of Oregonians and Washingtonians, the Jantzen Beach Carousel was a wonderful, affordable way for families to go have fun. Affordability should be our goal for the future. It’s all about family,” said Carter.

Designed and built by C.W. Parker in 1921, the Jantzen Beach Carousel is one of the biggest and fastest wooden carousels of its type left in the world. Weighing approximately 20 tons, it has a diameter of 67 feet and features four rows of 72 horses, plus two elaborately carved chariots.

Despite widespread adoration, the carousel provided its last ride on April 22, 2012. It was then disassembled and placed in storage, with no concrete plans for returning it to the public. It was donated to Restore Oregon in late 2017. Its future depends on securing a permanent new site.