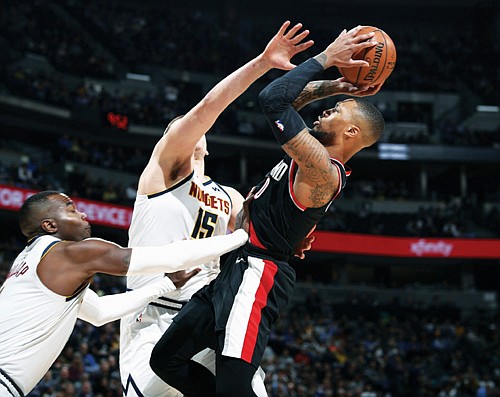 (AP) —The Denver Nuggets rode a 37-point performance from center Nikola Jokic to a 121-113 win over the well-rested Portland Trail Blazers Monday night in the opener of their second-round playoff series, despite Damian Lillard’s strong 39-point effort and Enes Katner’s formative return.

Lillard, who struck for 50 points, including a 37-footer at the buzzer to oust Oklahoma City in five games, missed 8 of 12 3-point attempts and Gary Harris blocked his 3 from behind in the closing minute to keep the Trail Blazers from closing in.

Kanter separated his left shoulder in Game 5 against the Thunder but scored 26 points in his return to the lineup.

Back-to-back layups by Lillard pulled Portland to within five points with nine minutes left, but Jokic sank a pair of free throws off CJ McCollum's flagrant foul sandwiched by a pair of dunks by Mason Plumlee as Denver pushed its lead back to double digits at 107-96.

Game two in the best-of-seven series is Wednesday at the Pepsi Center in Denver. Games three and four will be on Friday and Sunday in Portland.