School Board Candidate Shanice Clarke On The Issues 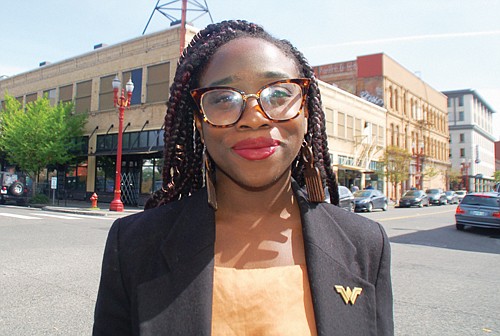 Shanice Clarke identifies with the value of doing holistic work with students to overcome obstacles and improve outcomes for disadvantaged students. She is one of the two African American candidates who are running for the Portland School Board from Zone 2, insuring at least one black member on the seven member panel for the first time in more than a decade. Photo by Danny Peterson

Shanice Clarke, 27, a career educator, aims to improve outcomes for disadvantaged students and students of color in the Portland School District by being elected to the district’s seven member board of directors, from Zone 2, representing schools that feed into Jefferson and Cleveland high schools in inner north, northeast and southeast Portland.

Clarke has traversed a personal and winding path that led her to becoming an advocate for education, a goal she calls her life dream.

“I dedicated my life advocating for students,” she told the Portland Observer. “I really identify with the true value of doing holistic work with students.”

A first generation Jamaican immigrant, Clarke has the experience of navigating some the obstacles that can come with families who are recent immigrants. She moved frequently between her home island and the states while growing up. She also painfully learned how a disadvantaged student can fall through the cracks in school and not get the help they need.

In her case, as a young girl, Clarke said she was not supported by guidance counselors and teachers after experiencing a troubled home life of trauma, addiction in the family, and loss. Rather than investing in her, they issued “a lot of suspensions and detentions,” which ultimately led her to not completing high school in Boston, Mass., she said.

Not to be deterred, Clarke followed up by getting her GED and pursing degrees in higher education.

She would go on to receive a Bachelor’s in Human Services and a Master’s in Educational Leadership from University of Northern Colorado, where she studied culturally responsive pedagogy and researched better ways of serving diverse students.

“I love being on the front lines with students and doing crisis intervention and really focusing on improving systems to address, refer, and embrace students in ways that they deserve to be wrapped around,” Clarke said.

Her achievements include the development of student engagement programs at PSU, as well as identity and leadership development work. She was part of the process to open the commons, helping to guide a consensus-building, collaborative stewardship process with students, faculty, staff and community members shortly after moving to Portland, directly after grad school, in 2016.

Clarke is a member of the Association of American University Professors, where she’s active doing lobbying and supporting the collective bargaining process. But while being an instructor in different capacities at times, she said she identifies most as being an education administrator.

“Being on the front lines, being a young professional, that gives me the ability to inform an education policy that’s connected to everyday experiences of students and I think that is something we’re missing on the Portland Public School Board,” she said.

Clarke is also a community organizer serving as a Board Member for OPAL Environmental Justice.

She was recruited to run by local African American community leaders, like Joy Davis, the executive director of the Portland African American Leadership Forum, and from leaders at Color PAC.

She said a recent audit of Portland Public Schools by the Oregon Secretary of State’s office showing dramatic shortcomings in outcomes for students of color in the district is helping inform her on the needs. Improving the district’s employee turnover rates by making improvements in teacher training, and supports, are actions she supports.

Shanice Clarke, a career educator who runs a resource center for black students at Portland State University, is running for Portland Public School Board, Zone 2, representing inner north, northeast and southeast Portland. Ballots for the May 21 election are in the mail.

New and improved restorative justice discipline practices—which focus more on rehabilitation and holistic development rather than penal actions for students who misbehave--are a solution Clarke wants to emphasize more.

According to an Oregon Legislative report from 2017 called the African American/Black Student Success plan, and developed by some of the most prominent equity education leaders in the state, black students are two times more likely to get detention, suspension, or another type of punitive action compared to white students, Clarke said.

In cases where schools in Portland added a restorative justice coordinator position as part of the student misconduct process, the rates of suspensions dropped by 50 percent, Clarke said.

“I know for example at Ockley Green, they had 184 suspensions the year before and then with the coordinator, there was only four,” she said.

Wrap around services in general, things like making sure students have housing or food assistance, is something Clarke wants to expand on. She added that she thinks the SUN Community Schools that offer added programs are doing a great job, but she’d like to see more offerings like that in other neighborhoods and schools that are under-resourced.

In regard to other plans to address racial inequality in the school system, Clarke said it should be a multi-prong approach. Firstly, the district needs to “have more teachers of color, more black teachers,” and make sure they have the supports in place so they stay.

Early literacy interventions, like Head Start and relief nurseries, are also something she wants to invest in, as well as having longer school days and longer school years.

Clarke said professional development and bias training, as it relates to developing pedagogy for teachers, is also something the district needs to be doing, something black educators have specifically requested, she said.

“That restorative justice piece paired with the training I think will do wonders for students at PPS,” she said.

Culturally responsive curriculum, as has been mandated with the passage of an Ethnic Studies bill in Oregon, is also important, Clarke said.

“It’s…critical to have students feel affirmed and reflected and celebrated through their lived experiences and how they connect to curricular goals. And I think we will see higher performance when we do that work.”

In addition, Clarke is a supporter of KairosPDX, the public charter school focused on closing the achievement gap for African American grade school students.

Clarke is younger than her opponent Michelle DePass in the May 21 vote-by-mail election, but Clarke points to her more years of overall professional experience in education.

“I think as it directly correlates to the job, I have direct relatable experience. I am a young professional,” she said. “I just graduated from grad school a few years ago. But I think that that’s also an asset. Being able to have a fresh perspective, a fresh set of eyes that’s connected and rooted in the experiences that students are having and educators are having and interconnecting those things to inform how we create goals; those are things that I think the board doesn’t have and could be a powerful tool moving forward.”

For more information about Clark’s candidacy, you can visit her website at shanice4pps.com.