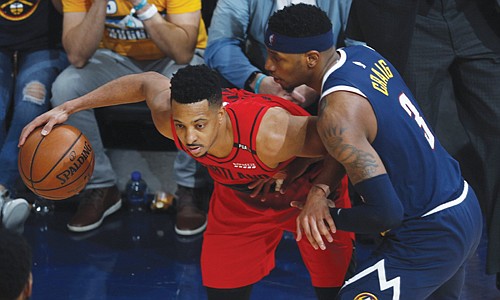 CJ McCollum was unstoppable as the Blazers beat the Denver Nuggets on Sunday in Denver to advance to the NBA Western Conference Finals against the Golden State Warriors. (AP photo)

A surprise trip to the NBA Western Conference Finals has Blazermania in overdrive.

The series has Portland’s sensational guard Damian Lillard returning to his hometown of Oakland; and two brothers from opposing sides named Curry facing each other in a NBA conference finals for the first time, highlighting some key matchups.

The best-of-seven series was scheduled to begin Tuesday evening in Denver with the outcome too late for press time. The series continues in Denver Thursday night before moving to Portland for games three and four on Saturday and Monday.

The Blazers advanced to the Western Conference finals for the first time since 2000 with an incredible road win in the seventh game of the conference semi-finals. CJ McCollum scored 37 points to help the Trail Blazers overcame a 17-point first-half deficit to beat the Denver Nuggets 100-96 on Sunday.

In the new series, Golden State’s Stephen “Steph” Curry, one of the NBA’s biggest stars, faces his brother, Seth Curry of the Trail Blazers a key contributor off the Portland bench who has been shooting from the three-point line better in the playoffs than his older and more famous brother. The matchup has the Curry parents, Sonya and Dell, enjoying the series from the sidelines and having the times of their lives.

Fans were given an opportunity to watch the first two road games from a big TV screen and viewing party at the Rose Quarter for free. The entire Western series will be on ESPN and not available to over-the-air broadcasts. 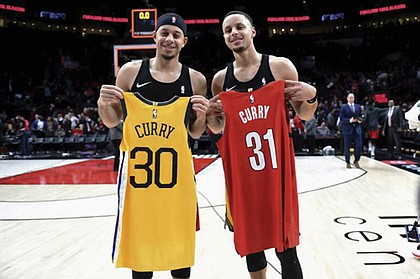