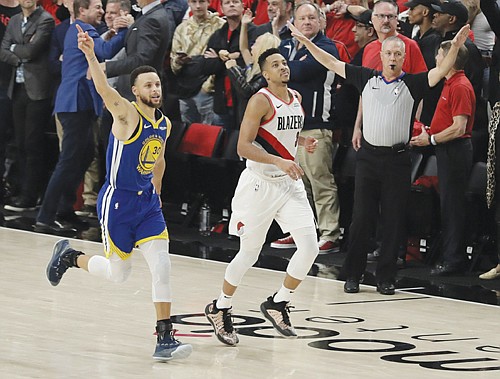 Golden State Warriors guard Stephen Curry celebrates as he runs next to Portland Trail Blazers guard CJ McCollum at the end of Game 4 of the NBA basketball playoffs Western Conference finals on Monday at the Moda Center. The Warriors won 119-117 in overtime. (AP Photo/Ted S. Warren)

The Golden State Warriors swept their way to a fifth straight NBA Finals, getting triple-doubles from Stephen Curry and Draymond Green in a 119-117 overtime victory over the Portland Trail Blazers on Monday night at the Moda Center.

Damian Lillard, playing with separated ribs, had 28 points and 12 assists for Portland. He missed a 3-point attempt as time ran out in the extra period. Meyers Leonard added a career-high 30 points along with 12 rebounds.

The Warriors were up 114-113 in the extra period after Green missed the first of a pair of free throws. CJ McCollum's jumper from out front briefly gave Portland the lead but Alfonzo McKinnie's basket put Golden State back ahead and Green made a 3-pointer to push it to 119-115 with 39 seconds left.

Lillard made a layup and Curry missed a jumper to give Portland back the ball. Facing stifling defense from both Green and Klay Thompson, Lillard couldn't get off a shot but the ball went out of bounds in the scramble. The Blazers got it back with 3.3 seconds left but Lillard's final shot didn't fall.

For the third straight game the Trail Blazers led at the half. They stretched the lead to 17 points in the third quarter, but the Warriors went on a 12-0 run to close within 95-90 early in the final period.

Green's long baseline jumper gave the Warriors a 108-106 lead with 3:30 left. Lillard's 3-pointer put the Blazers back ahead and Leonard's dunk extended it to 111-108 with just under 2 minutes to go.

After Thompson's 3-pointer tied it up again both Curry and Lillard missed 3s. Curry made a 3 from the corner with 10.7 seconds left but he was called for traveling first and it didn't count.

Lillard's layup bounced around the rim and out and the game went to overtime.

Lillard separated his ribs in Game 2 but was playing through the pain. He averaged 33 points in the first-round playoff series against Oklahoma City, hitting a series-clinching 3-pointer in Game 5, but he struggled against Golden State's defensive focus on him.